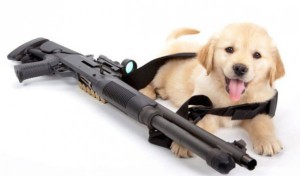 A man who tried to shoot seven puppies was shot himself when one of the dogs put its paw on the revolver’s trigger.
Jerry Allen Bradford, 37, was being treated at a hospital for a gunshot wound to his wrist.
Bradford said he decided to shoot the 3-month-old shepherd-mix dogs in the head because he couldn’t find them a home, according to the sheriff’s office.
On Monday, Bradford was holding two puppies — one in his arms and another in his left hand — when the dog in his hand wiggled and put its paw on the trigger of the .38-caliber revolver. The gun then discharged, the sheriff’s report said.
Deputies found three of the puppies in a shallow grave outside Bradford’s home, said sheriff’s Sgt. Ted Roy.
The other four appeared to be in good health and were taken by Escambia County Animal Control, which planned to make them available for adoption.