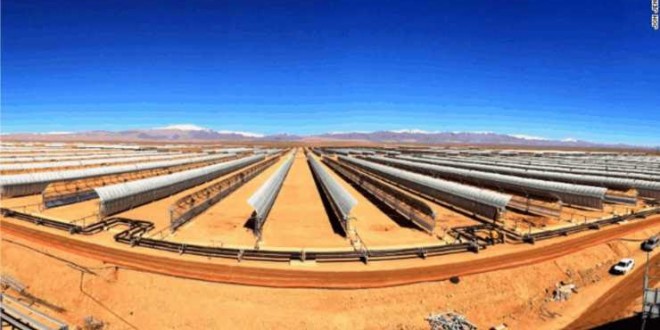 World’s Largest Concentrated Solar Plant Switches On In The Sahara

February 10, 2016 Comments Off on World’s Largest Concentrated Solar Plant Switches On In The Sahara 16 Views 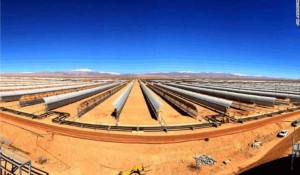 Morocco has switched on what will be the world’s largest concentrated solar power plant.

The new site near the city of Ouarzazate — famous as a filming location for Hollywood blockbusters like “Lawrence of Arabia” and “Gladiator” — could produce enough energy to power over one million homes by 2018 and reduce carbon emissions by an estimated 760,000 tons per year, according to the Climate Investment Funds (CIF) finance group.

As His Majesty Mohammed VI of Morocco pressed a button on 4 February 2016, the first phase of the three-part project was set in motion.

Harnessing the power of salt

The solar plant, called the Noor complex, uses concentrating solar power (CSP) which is more expensive to install than the widely used photovoltaic panels, but unlike them, enables the storage of energy for nights and cloudy days.

Mirrors focus the sun’s light and heat up a liquid, which, when mixed with water, reaches around 400 degree Celsius. The steam produced from this process drives a turbine and generates electrical power.

A cylinder full of salt is melted by the warmth from the mirrors during the day, and stays hot enough at night to provide up to three hours of power, according to World Bank, who partially financed construction of the plant through a $97 million loan from the Clean Technology Fund.

“With this bold step toward a clean energy future, Morocco is pioneering a greener development and developing a cutting edge solar technology,” said Marie Francoise Marie-Nelly, World Bank Country Director for the Maghreb.

“The returns on this investment will be significant for the country and its people, by enhancing energy security, creating a cleaner environment, and encouraging new industries and job creation.”

Imported fossil fuels currently provide for 97% of Morocco’s energy need, the World Bank says . As a result the country is keen to diversify and start using renewable energy.

This goal was one of the reasons that Morocco was chosen to host the next United Nations climate change conference (COP 22) in November 2016, according to the CIF.

“Morocco’s leadership in this area may provide the model for other countries to follow in pursuing development of their energy sectors in a sustainable manner.”

As well as lowering carbon emissions and dependence on fossil fuels, this plant is expected to increase the share of renewable energy in total electricity generation from 13% to 42%, according to CIF.

It is also hoped that the project will positively impact the surrounding area. Approximately 583,000 people live in Ouarzazate town 10km (6.2 miles) from the site.