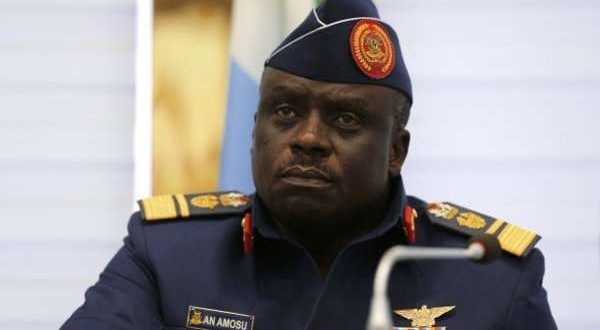 The immediate past Chief of Air Staff, Air Marshal Adesola Amosu, has been undergoing marathon interrogation at the Economic and Financial Crimes Commission’s office since Wednesday.

The PUNCH reliably gathered on Thursday that two teams of the EFCC investigating the arms procurement fraud had taken turns to interrogate the former chief of air staff since he reported at the commission’s headquarters at 10.am on Wedn 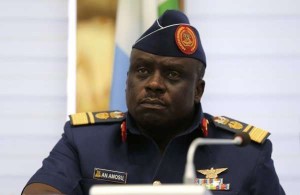 It was learnt that between 10.30pm on Wednesday and 8pm on Thursday, Amosu had been quizzed for a total of 15 hours.

Findings showed that besides being quizzed, the former chief of air staff was asked to write a statement on the allegations by the presidential committee that investigated arms procurement under former President Goodluck Jonathan.

It was gathered that among other issues, he was quizzed over the alleged fraud that characterised 10 contracts of the Nigeria Air Force between 2014 and 2015, totalling $930.5m

It was learnt that most of the questions asked Amosu centred on the procurement of two used Mi-24V helicopters instead of the recommended Mi-35M series at the cost of $136.9m.

The helicopters were said to have been inflated and not operationally air worthy at the time of delivery. A brand new unit of such helicopters goes for about $30m.

Besides Amosu, it was learnt that the EFCC had also been interrogating another Air Vice Marshal, who had been taken into custody.

An EFCC operative, who confided in The PUNCH, could not give the identity of the second military personnel being interrogated alongside the former Chief of Air Staff.

The source stated, “The interrogation of the former chief of air staff started around 10.30am on Wednesday and I think between yesterday (Wednesday) and 8pm today (Thursday), he must have been grilled for a total of 15 hours. He has also written a statement.”

President Muhammadu Buhari had, on January 15, directed the EFCC to probe 18 top officers of the military comprising both retired and serving personnel as part of the ongoing efforts to unravel the $2.1bn arms funds, allegedly mismanaged under the immediate past National Security Adviser, Col. Sambo Dasuki (retd.).

Another operative also confirmed that Amosu was detained by the EFCC on Wednesday and had been there since then.

“The former Chief of Air Staff, Air Marshal Adesola Amosu, came yesterday (Wednesday) in response to our invitation. We sent out invitations to them last week and they were expected to report with effect from Wednesday,” the operative said.

The Head of Media and Publicity of the EFCC, Mr. Wilson Uwujaren, said he did not have information on the detention of the former Air Chief when contacted.

“I don’t have that information,’’ he said.

It was also learnt that the EFCC on Wednesday started the interrogation of other 18 serving and retired military officers, who were ordered to be investigated by the President.

It was gathered that besides Amosu, others, who were quizzed on Wednesday, were asked to go home.

The President’s Senior Special Assistant on Media and Publicity, Garba Sheu, had, in a statement on January 15, said the presidential panel’s findings indicated that the procurement processes were arbitrarily carried out and generally characterised by irregularities.

According to him, the panel also stated that in many cases, the procured items failed to meet the purposes they were procured for, especially the counter-insurgency efforts in the North-East.

He had said, “A major procurement activity undertaken by ONSA for NAF was that concerning the contracts awarded to Societe D’ Equipment Internationaux (SEI) Nig Ltd.

It had stated that the letters of award and end user certificates for all the contracts issued by NAF and ONSA did not reflect the contract sums.”

Amosu had, in a report to Dasuki, said the four Alpha-Jet aircraft were delivered.

The panel had stated that the Alpha-Jets were non-militarised hence they could not be deployed in the North-East and that they were currently deployed only for training at NAF base, Kainji.

The presidential panel had said, “Furthermore, the procurement of the Alpha-Jets was contrary to the recommendation of the assessment team. The committee found that the conduct of Air Marshal Amosu was deliberately misleading and unpatriotic.

“The contract for the procurement of 36D6 Low Level Air Defence Radar for the NAF was awarded to GAT Techno Dynamics Ltd in April 2014 at the cost of $33m and was funded by ONSA.”

The radars were said to have been valued at $6m.

culled from the punchng.com

Share
Previous Fire Ravages Market, Fuel Station In Lagos
Next Buhari Is Repeating Mistakes Of Past 30 Years Says The Economist