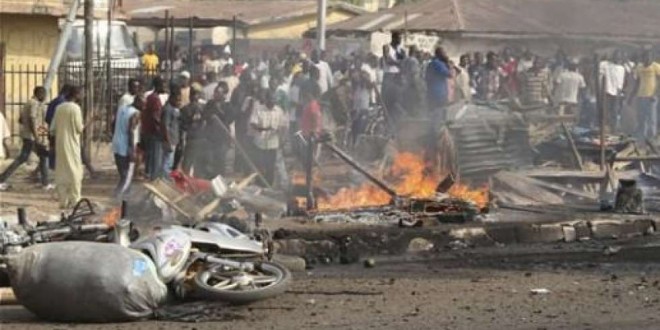 Two suicide bombers have struck in Chibok, Borno state, “killing and injuring many people”, sources in the town have confirme 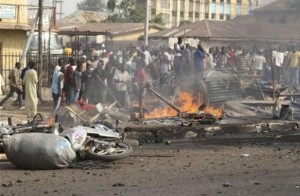 d.  A resident of the town, who did not want to be named, said one of the blasts happened just 3metres away from his location. “The blasts happened a few minutes before noon at the market square. The suicide bombers who entered the town were six in all,”

He said, “Normally, today is supposed to be the market day, but the market did not operate based on the insecurity in this area. So if the market ran today, the death toll would have been even heavier.” He explained that after the bombers entered the town on bicycles with explosives “strapped to their backs like babies”, one of the bombers detonated his explosive device in the Utaku area of the town, where he injured a soldier.

“The other bombers tried to detonate theirs at the market but one of them was captured alive, while the five others died in the blasts.” He added  that , “They were all men but they disguised as females. Eleven people, including five suicide bombers, died in that attack but more than 30 people were injured.”

When contacted on the attack, Sani Usman, spokesman of the Nigeria army refrained from talking, saying Operation Lafiya Dole in Borno state should instead be contacted. Chibok has been an ever-present media item since April 2014, when Boko Haram abducted more than 200 girls from the government girls secondary school in the town. Majority of the girls are still in captivity.