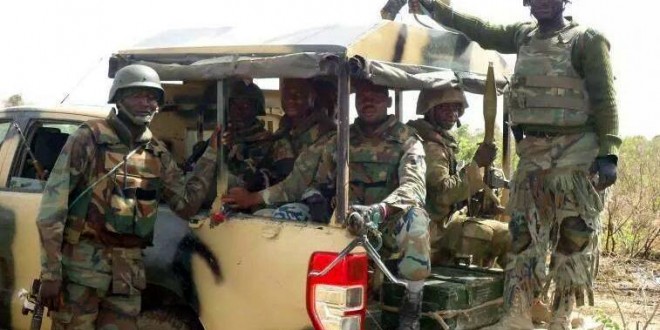 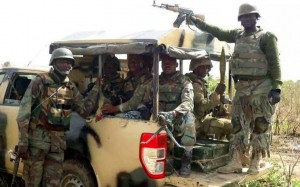 The Nigeria Army says it has killed 14 Boko Haram insurgents and captured two others around Chirokusko Village in Tarmuwa Local Government Area in Yobe. Brig.-Gen. Mohammed Aliyu, General Commanding Officer (GCO), told newsmen in Damaturu on Monday that 16 assorted weapons and ammunitions had also been recovered from the insurgents.
Aliyu said the terrorists sneaked into the area and were about settling down when the army ambushed them following a tip-off from patriotic citizens. He commended the host communities for their cooperation which included providing security operatives with useful information.

According to him, more troops have been deployed to the area to enhance manpower to consolidate the gains recorded in the fight against insurgency.

The Damaturu-BuniYadi-Biu road will soon be opened to motorists for economic activities to resume in the liberated areas.’’ The GOC said as part of efforts to boost the morale of the troops, more than 10, 000 soldiers had been given special promotion, while 1,500 others were currently under consideration for promotion to their next rank.

The GOC, further added that  the army will continue to operate within the rules of engagement and with respect for human rights. Aliyu said the closure of markets in some communities were based on security reasons and pleaded with people of the area to be patient, adding that the markets would soon be re-opened for business.  ”

We are aware of the inconveniences the market closure might have caused the communities, but we are working hard to reopen them for economic activities to resume,’’ he assured. The GOC called for improved cooperation between soldiers and the communities in order to collectively defeat insurgency in the country