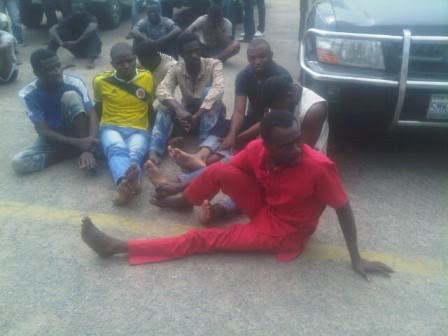 The Lagos State  Police command Friday, paraded 36 crime suspects, among them a pastor, who were arrested for various criminal activities in Lagos State.
Pastor Titus Onwuchekwa of the Presbyterian Church, Umuahia in Abia State and Osas Felix from Edo State specialized in buying stolen vehicles from robbers and selling to unsuspecting people.

In a statement signed  by the Lagos State Commissioner of Police, Mr Fatai Owoseni, an unregistered Toyota 4 Runner SUV, Toyota Camry with registration number AAA 391 AA, Toyota Camry with number FKJ 441 DV, Lexus Rx30 with number LSR 520 RF, Toyota Highlander SUV with number LSR 492 DX and Mitsubishi Pajero SUV with number SMK 484 DS were recovered from the suspects.
Twelve guns, six axes and four cutlasses were recovered from the suspected cultists. Some of the suspects confessed to having been involved in kidnapping, fraud, motorcycle robbery among others.
The Commissioner of Police noted that the rate of crime and other criminal activities was gradually declining in the state, a success he attributed to human capacity of the force and the quantum of logistics and moral support given to the Command by the State government. He disclosed to newsmen that the police were able to achieve these within two weeks, between 7 January to 21 January, 2016.
Post Views: 0