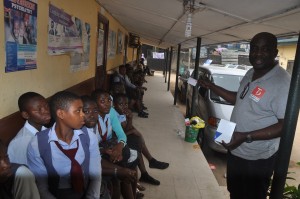 No fewer than 740 persons have benefitted from a free sickle cell screening service recently carried out in communities and secondary schools in the Oshodi/Isolo Local Government Area of Lagos and Modakeke of Osuna states, respectively in Nigeria by TunMicro Sickle Cell Support Group, a non-government, non-profit sickle cell support organization based in the United Kingdom and Nigeria.

The free screening exercise, which was organized in conjunction with the Oshodi/Isolo Local Government Area, Lagos, Nigeria, was part of the organizations’ corporate social responsibility services to humanity.

From the result collated after the exercise in Oshodi, 479 beneficiaries of the free tests were discovered to have the ‘AA’ status, which constitutes 70.5% of the total number of persons screened.

From the records, those in the ‘AS’ and ‘AC’ blood group are said to be the risks of the population.
This is because they have the potential to produce more sickle cell gene if they were not properly informed about their status.

Speaking at the nine days long free exercise (December 3 to 11, 2015), which took place at the public health centre, Oshodi, Lagos, Nigeria, Mr. Ismaila Olatunji Sule, Initiator and Executive Director of TunMicro Sickle Cell Support Group, said the purpose of the screening is to prevent sickle cell disease that cost Nigeria so many preventable deaths, saying, that the little efforts made by the organization may not seem as if it can do much on its own, but the resulting waves of the initiative can carve and re-carve the perfect surface of the globe.

Mr. Olatunji Sule, who is a Biomedical Scientist at the Medical Microbiology Department of the South Eastern Health & Care Trust Ulster Hospital, Belfast, Northern Ireland in the United Kingdom, stressed the need for private and public sectors to support the course of the organization, adding that it would be profitable to humanity if the free medical screening service continues.
He however noted that the organization’s next visit to Nigeria to carry out the same exercise in other communities in the country is yet to be decided.

The World Head Organization had estimated that Nigeria has the highest prevalence of Sickle Cell Disease (SCD) in the world with 40million Nigerians carrying the genes.

By this, the biomedical science expert said he believes that the only method of controlling and reducing the sickle cell disorder in Nigeria is by creation of awareness via educating and encouraging adolescents to determine their genotype status before their reproductive ages.
This, he said, informed the need for him to form a sickle cell foundation that will not only create awareness about the deadly non-communicable disease, but also offer genotype test at no cost for adolescence in Nigeria and counseling those who are carriers of the dreaded SCD.

“Those who are already affected with sickle cell anemia will be advised and directed accordingly to appropriate quarters. My desire to give back may be my life project to prevent and control this genetic problem in Nigeria.

“The purpose of the screening is to identify sickle cell carriers. This gives them the best opportunity to consider the implications and to understand the choices they may face before deciding to have a family.

“TunMicro Sickle Cell Foundation is reaching out to the people of local communities both in Nigeria and in the UK. The purpose is to increase awareness and the importance of Sickle cell screening to prevent the disease and promote better understanding of the disease and to improve the quality life of people affected by this disease,” Sule said.

Explaining the implication of lack of awareness of sickle cell disorder, the TunMicro initiator said SCD is a major public health concern in Nigeria, and to the best of his knowledge, there are no enough control programmes to cub the trend.

According to him, systematic screening for SCD using a simple blood test is not a common practice in communities in Nigeria, and diagnosis is usually made when a severe complication occurs.
“Presently, there is no cure for SCD, and thus, lack of awareness of this disorder will increase the number of people with sickle cell disease and markedly increase morbidity and mortality in infancy and early childhood.

The people may not be able to prevent the preventable death of the children,” he added.
Sule also stressed the need for implementation of national sickle-cell disease control programmes to be established in Nigeria for prevention and control of the genetic health problem.
He explained that important areas of work should cover advocacy; prevention and counseling; early detection and treatment; data collection, surveillance and research; and community education and partnerships.

“A multidisciplinary team involving health and social workers, teachers, parents, religious leaders and concerned non-governmental organizations should work on the practical aspects of implementation and monitoring of the programme,” he said.

On partnership, he indicated TunMicro’s intention to establish between community government of the day, health professionals, parents, patients, teachers, religious leaders, relevant community interest groups and the media, where appropriate.

“Our partnerships with them will facilitate public education, identification of genetic risks in the community by recording family disease histories, genetic counseling, awareness and active participation in prevention and care programmes,” he said.

In his reaction to the development, Hon. Olajobi Daud, Executive Secretary, Oshodi/Isolo Local Government, who showed excitement when he visited TunMicro’s humanitarian service camp, and noticed that, as at the time of his visit, 688 people have so far benefitted from the social responsibility service, expressed amazement that people could turn out in such number with the interest to determine their sickle cell status.

He commended Olatunji Ismaila for a job well done, saying, “I have always trusted you as a son of the soil of your father land. And you have not betrayed the trust as you have come home to give back to the community.”

Hon. Daud also used the opportunity to determine his genotype status during his visit to the venue.
Also in her reaction, Dr. (Mrs.) Oludolapo Sotunde, Medical Officer of Health, Oshodi/Isolo L.G, who commended the TunMicro initiative, described it as ‘an eye opener’ that informs those who could have fallen victim of the sickle cell crisis.

She said, “Nigeria, being a country known with sickle cell crisis, we should emulate the gesture exhibited by the TunMicro initiator.

He lived in this community and now in the UK. But unlike many who travelled and abandoned their root, I am happy that such initiative came to his mind, having being familiar with the root problem of his community.

We are partnering with him because the initiative is a positive one, and we being a responsible local government.”

Dr. Sotunde also noted that it was important to advise all to know their blood status, failure to which usually results to untold hardship and frustrations of parents abandoning their jobs and other misfortune all in a bid to attend to the child’s sickle cell crisis.
Beneficiaries of the free screening excercise also expressed delight over the giant stride taken by the TunMicro organization.

Obioma Okafor, 16, an SS3 student of Bolade Senior Grammar School, Oshodi, said she was so happy, having being on the watch all the while for such an opportunity to know her blood status.
“I will advice others to come and also check their blood status, since it is free.
I have learned that it’s important for pole to know their blood status so as to avoid the likely future effect of it.

“People shouldn’t be scared of checking their blood status for the fear of having a negative result. Being an ‘SS’ is not the end of life, because with or without a Sickle cell status, they can still make it I life,” Obioma said.

Another beneficiary, Baliqis Eludoyin, 30, an Hair stylist, who has been married for eight years, said she heard about the initiative from a neighbor, and thought initially that it was mere rumor until she later discovered that it was a good initiative, especially knowing that it was an individual group initiative.

“My advice for them is that they should keep it up, and not rest on their oars,” she said.
A middle aged civil servant, who wouldn’t like his name mentioned, commented on the case of his fifteen-year old daughter, who had been battling with sickle cell.

He said he had been following up on her health situation, applying the prescribed medication, and his daughter is still hail and alive.

But he stressed the need for everybody to discover their blood status in order to avoid similar crisis.