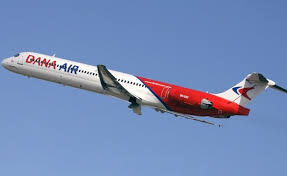 Air transport operators under the aegis of the National Union of Air Transport Employees (NUATE], have expressed disapproval of request made by Dana Airline seeking to commence a Regional Flight Operations from the Murtala Mohammed Airport 2 [MMA2] in Lagos.

The union had, in a solidarity rally to the operational Headquarters of the Nigerian Civil Aviation Authority [NCAA] in Lagos on December 3, 2015, canvassed for consideration of some vital issues by the management.

Apart from opposing Dana’s request to commence a Regional Flight Operations from the Lagos airport, other issues listed by NUATE for management attention include Training for Technical Staff, Autonomy, Staff Claims and Airlines Indebtedness to NCAA.

Comrade Williams Ukah, Deputy President of NUATE, who identified the pressing issues to be considered, led the Joint Action Congress (JAC) Rally to all the Aviation Parastatals Offices before they rounded at Aviation House.

The Unions urged the Authority not to accede to DANA request to operate a Regional Flight from the MMA2 so as not to incur the wrath of labour in the sector.
The Unions hinged their position on the ground that the request negates Aviation Security at the Terminal and the agreement between the Federal Airports Authority of Nigeria [FAAN] and the operator of the Terminal.

They were however full of praise to the management of the Authority over the amicable resolution of the issue of staff promotions and prompt payment of staff salaries and other emoluments at this time of the year.

On behalf Capt. Usman Muhtar, Director-General, NCAA, Alhaji Nuhu Ozigi, Director of Finance and Accounts, who addressed the Unions, also received a letter addressed to the DG.
Ozigi stated that, as a regulatory body, issues bordering on staff training and re-training (local or foreign) are of utmost priority.

“But in compliance with budgetary regulatory policy of the Federal Government, foreign trainings for technical staff needs approval from the Head of Service of Federation through the Ministry and the approval processes are ongoing,” he said.

The Finance Director promised that the management would look critically into the issue of DANA’s request before taking a decision on it.

He however noted that some technical staff from the critical sections of NCAA are currently at the Nigerian College of Aviation Technology[NCAT] undergoing various relevant local trainings in line with International Civil Aviation Organization’s (ICAO) recommendations.

He disclosed that, while pensions and gratuities are not owed to any staff, modalities have been fashioned out on how to liquidate pending staff claims on a monthly basis, even though it might seem to be going fairly slowly.

On Airlines indebtedness in the face of government’s policy of debt recovery without disruption of flight operations, the DFA said that NCAA has put aggressive and concerted efforts in place at debt recovery, more particularly, by local airlines.

On issue of Autonomy, Ozigi was of the view that NCAA is not restricted in its regulatory oversight responsibilities in any way.

According to a statement Signed by Sam Adurogboye, General Manger, Public Relations, NCAA, which was made available to our correspondent on Tuesday, the presentation of the Union’s letter to the DFA was said to be the high point of the rally.

Adurogboye stated however, that the letter was thereafter presented to the DG for management review.