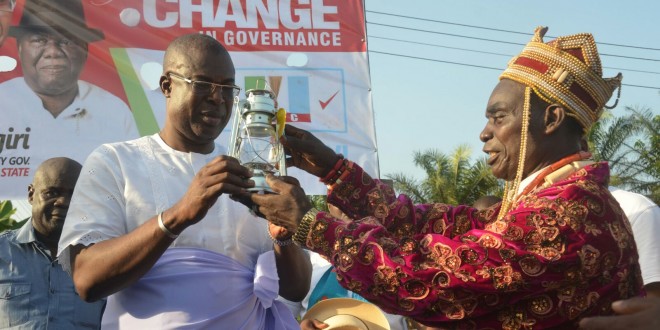 November 15, 2015 Comments Off on Dickson’s Kinsmen Back Sylva 39 Views

Kinsmen of the Bayelsa State Governor, Mr. Seriake Dickson, Friday, vowed to support the aspiration of the All Progressives Congress (APC) candidate, Chief Timipre Sylva, in the December 5 governorship election.

The kinsmen from Sagbama, Dickson’s Local Government Area, said they found in Sylva, a good friend but in Dickson, a bad brother.

Insisting that a good friend is better than a bad brother, the kinsmen said their brother abandoned them and failed to site developmental projects in their communities for over three years.

The kinsmen from Toruebeni community and other wards in Sagbama said they would gladly vote for the APC and Sylva to change Dickson whom they accused of insensitivity and woeful performance.

They were particularly angry that Dickson refused to rehabilitate a school he attended in Toruebeni and failed to complete a road leading to the community, which Sylva almost finished before he was booted out of office.

They spoke when Sylva led a team of APC leaders to Toruebeni community to identify with them on their yearly festival entitled, Ebenimo-oge.

The surprise visit of Sylva and his team attracted crowd of people from neighbouring communities in Sagbama who came to catch a glimpse of the APC candidate.

In the entourage of the former governor were the Director-General of the Sylva/Igiri Campaign Organisation (SICO) and Minister of State for Agriculture, Senator Heineken Lokpobiri and former acting Governor of the state, Chief Nestor Binabo.

Others were former two-time member of the Federal House of Representatives, Mr. Warman Ogoriba and other stalwarts of the APC.

The APC candidate was given a royal blessing by the traditional ruler of the community, His Royal Highness, Serifa Binagha, who tied a white wrapper round Sylva’s waist and gave him a lantern signifying light.

Binagha who described himself as an apostle, said Sylva would emerge victorious like previous candidates who stood for elections in the past after receiving his blessings.

“I am an apostle of God. We want rapid development and network of roads. We want roads to get to our community. Most of these roads have been in the drawing board for many years. Our community is the main Wilberforce Island but we have been in darkness.”

ln his response, Sylva described the community as great and ancient vowing to develop the area if given the mandate.

He expressed dismay that the people could not drive into their community because the road and a bridge he almost completed were abandoned by the current administration.

He said: “l am readier than ever before to govern and develop you. When l wanted to come, l thought we woukd drive down but we used boats. The bridge and the road were started by Alamieyeseigha.

“I took it up and it was remaining only two pillars to complete the bridge. I concluded arrangment to pay N2bn to the contractor to finish everything. But l was removed.

“Your son is in government. If he really loves you, why can’t he do it? When you vote us in within one year, you will drive to this community”.

Describing himself as light, he said: “Whenever you vote for us, you will see the difference between night of today and the light that will come tomorrow.”

He said the College of Education which was relocated from his community Okpoama to Sagbama would remain in its present location if he wins the election.

“I am not going to take the College of Education back to my home town. I am not an evil man like them. What have they done to develop the college? I will make sure we develop it properly. We now have a minister of agriculture.

“We will partner and do great things together. Good friends are better than bad brothers. I am a good friend of Sagbama. You have shown me love, friendship and brotherliness. I adopt this community as my second home”, he said.

He derided the incumbent governor for luring people to campaign for him with new appointments saying “campaign by appointments” would not save him.

He said Dickson’s current style of distributing appointment letters was deceitful adding that the governor will sack his new appointees after failing to use them to secure a second term.

He said: “This government has no focus from the beginning. But we have focus. It is a new day. Wake up. The APC boat is sailing and nobody can stop it. It is like the Noah’s Ark.

In his remarks, Lokpobiri said there was hunger in the state and wondered what the governor had done with the state’s funds.

He said it would be disastrous for the people to stay in hunger for another four years adding that APC is the only solution out of poverty.

Describing Sylva as a lover of the people, the minister said Sylva’s government would partner with the Federal Government to develop rural areas in the state.

Earlier in his welcome address, Binabo, a kinsman of Dickson, said PDP would be buried on December 5 and called on the people to be united in voting Dickson out of office.

He said: “The time Sylva was in government there was no hunger. Now there is nothing happening. People can’t even host festivals because there is no money.

“This government is selfish. It is a very bad government. I am assuring you that the APC government will make your school a boarding school. I know Sylva, he is going to do it.”

Also other speakers and community leaders such as Chief Christopher Orus, Victor Eniekenimi, Freedom Ogugu, Edure Barnabas and Biribina, took turns to lament the alleged hardship in Dickson’s government and the need for a change.