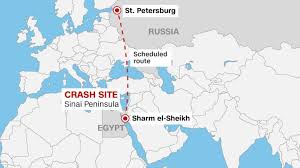 According to a security officer who visited the scene of the accident , said the plane was completely destroyed and all on board probably dead.

“The Egyptian aviation ministry said the Airbus A-321, operated by Russian airline Kogalymavia with registration number KGL-9268, was flying from the Sinai Red Sea resort of Sharm el-Sheikh to St Petersburg in Russia when it went down in a desolate mountainous area.

“It took off at 5:51 a.m. Cairo time (0351 GMT) and disappeared from radar screens 23 minutes later,” the ministry said in a statement. “After delays caused by poor weather conditions, search and rescue teams located the site of the crash in the Hassana area 35 km (22 miles) south of the Sinai Mediterranean coastal city of Al Arish.”

After the crash, a militant group affiliated to Islamic State in Egypt had claimed responsibility as a response toRussian airstrikes that killed hundreds of Muslims on Syrian Land, but Russian’s Transport Minister told Interfax news agency the claim cant be considered accurate.

As a way of expressing their condolences to their partners , Air France and Lufthansa have paused flying via Sinai.
The Russia government have declared a day mourning