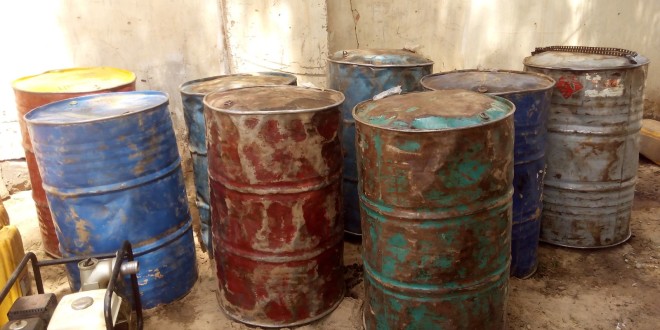 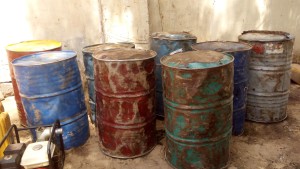 By Patrick Aigbokhan
Troops involved in the ongoing campaign against the insurgents have discovered and dismantled a major Boko Haram’s fuel depot that was discovered at Ladu Bumbawa Ward of Guzamala Local Government Area of Borno State, Col. Sani Usman, Acting Director, Army Public Relations, has said.
Recalling that the insurgents captured seven persons at Gajere, including the Chief Imam of the community, and took them to the dismantled fuel depot of the insurgents, Usman said that three of the abducted people were able to escape from the insurgents and later led the soldiers to where the other four were kept.
According to the Army spokesman, the troops had also blocked the major Boko Haram’s fuel supply route to Babangida in Tarmuwa Local Government Area of Yobe State.
He said, “Following a tip off by well-meaning citizens, troops of 3 Division yesterday (Thursday) swooped on and dismantled a Boko Haram fuel dump located at Ladu Dumbawa ward, Guzamala Local Government Area of Borno State.
“It will be recalled that suspected Boko Haram terrorists had abducted seven persons in Gajabere and took them to the same location. Those kidnapped were three local ward heads called “Lawani” and their respective deputies, as well as the Chief Imam of the town.
“However, through sheer guts and bravery, three of them escaped and reported the matter to the security agents. This led to the rescue of the rest and discovery of the well-concealed terrorists’ fuel depot which was also destroyed by the troops.
“The troops have further blocked the terrorists’ supply route that led to Babangida in Tarmuwa Local Government Area of Yobe State where they mostly get the supplies.”
Usman said that the troops were still intensifying efforts to block the logistic supply bases of the insurgents in order to hasten the process of their defeat.