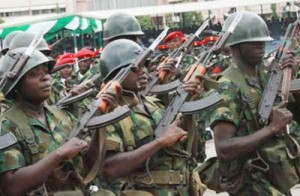 Troops conducting intensive patrols and vigilant operations in the North East have continued to yield positive results with the arrest of 33 suspected food suppliers to the Boko Haram terrorists in Damboa axis around Azir-Wajiroko road, Borno State.

In a statement by the Director Of Army Public Relations (DAPR), Col. Sani Usman, Usman revealed that the 33 suspected Boko Haram accomplices were arrested with large quantity of foodstuff meant for Boko Haram terrorists at Korode.

According to him, nine of the 33 suspects were from Korode, five from Auma, 10 from Geargube, four from Kausautaya, four from Bulbul and one from Dolomi villages.
Although some of the suspects claimed to be traders, he said, they did not deny buying and selling food items to the terrorists.