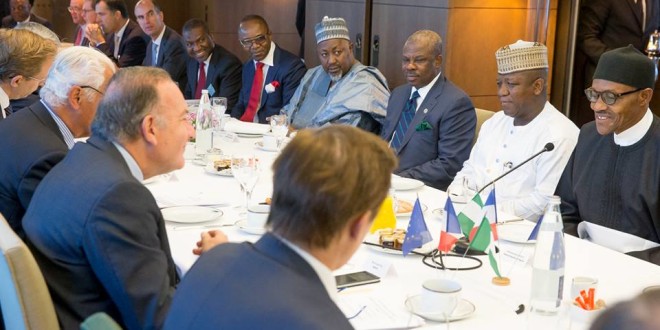 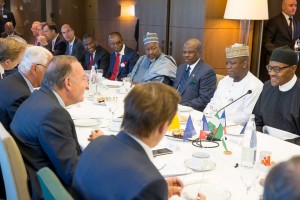 President Muhammadu Buhari on Monday attended a gathering of French investors at the Nigerian-France Presidential Business Forum held at the headquarters of the French Business Confederation (MEDEF) in Paris.
At the gathering, President Buhari assured the investors in France and other parts of the globe of his administration’s commitment to provide a suitable business environment that would boost economic activities and create jobs for Nigerian youths.

The President stated that his decision to approach headlong, the issue of insecurity within the early days of his government was to ensure the safety of all citizens and guarantee enabling environment for both local and foreign investors.

He explained that Nigeria and France, which already have a cordial trade partnership, needed to promote a win-win sustainable business relationship.

He recalled the longstanding economic ties between the two countries, which, he said, dates back as far as 1902, when the Compagnie Française de l’Afrique Occidentale set up a training programme in Lagos and assured that his government would rebuild Nigeria into a competitive, virile, productive economy “based on excellence, integrity, transparency, accountability and respect for the rule of law.”

“It is a positive development that today Nigeria is the largest trading partner with France in Africa. But opportunities abound to greatly increase the current $5 billion annual trade volume. And I fully agree with President Hollande when he declared in February, 2014 in Abuja, that trade volume between both countries should double in four years,” the President said.

Buhari explained further that trade expansion is to cover critical areas such as, agriculture, energy, automobile and skills development.

The President assured the investors that his government would spare no effort to sustain Nigeria’s credentials as the preferred and number one investment destination in Africa as well as the country with the fourth highest investment returns in the world.

Reacting to the development, Mr. Pierre Gattaz, President of MEDEF, organizers of the French-Nigeria Business Forum, who had, in his earlier remarks, thanked the President for mobilising the platform, expressed confidence and interest of French businessmen in the Nigerian economy, as the biggest in Africa.