September 9, 2015 Comments Off on DSS Invasion Of A-Ibom Govt House: Nigeria Is Sliding Into Dictatorship Under Buhari —PDP Govs 31 Views 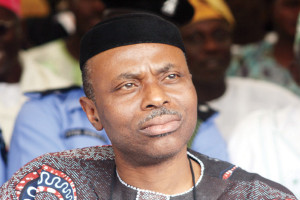 The Peoples Democratic Party (PDP) governors have lamented that Nigeria is sliding into dictatorship under the leadership of President Muhammadu Buhari.

The PDP governors led by their Chairman and Ondo State Governor Olusegun Mimiko, in a communiqué, said that the invasion was against the spirit, ethos, values and fundamental tenets of democratic norms and tradition, more so with the existence of a duly elected and sworn-in governor of the state.

He said: “We insist that the trend must stop henceforth. No democracy survives without a viable opposition in any part of the world and we must also remember to remind the All Progressives Congress (APC) that they are the real beneficiaries of the liberal democratic ethos of the PDP.

“We again advise DSS to preoccupy itself with the task of ensuring internal security and desist from daily intimidation of members of the opposition. We implore the international community, the civil society organisations and human rights activists to call the APC-led Federal Government to order and to insist that it respects the well-entrenched democratic tradition.

“We all have a duty to prevent what looks to us like a steady slide of this country into dictatorship.”

Mimiko said that PDP governors were alarmed and shocked by such desecration, noting that it was an assault on democracy.

He added that what happened in Akwa Ibom State posed serious danger to the country’s fledgling democracy.