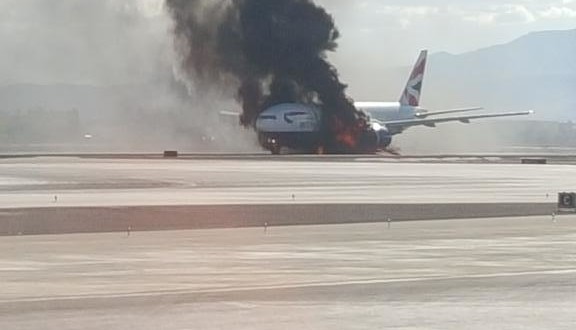 September 9, 2015 Comments Off on British Airways Plane Catches Fire In US 33 Views 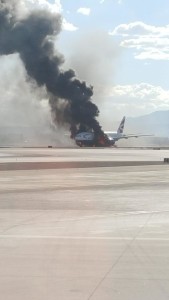 A British Airways jet, a Boeing 777, has caught fire at Las Vegas airport, sending smoke billowing into the air, after suffering what the pilot described as a “catastrophic failure” of the left engine.

The plane – heading from the US city’s McCarran airport to London Gatwick – could be seen with flames around its fuselage.

All the 159 passengers and 13 crew on board were evacuated, and the fire was swiftly put out by around 50 firefighters. An airport spokeswoman told reporters: “All passengers were evacuated quickly and safely and taken by bus to the terminal.”

Fire officials said 14 people were taken to hospital to be treated for minor injuries, including cuts and bruises, most a result of sliding down the inflatable chutes to escape.

“We cannot express enough gratitude to the emergency response crews, as well as the British Airways crew.”

The National Transportation Safety Board was investigating the incident, she added.

The plane’s take-off had been aborted shortly before the fire broke out. TheFederal Aviation Administration (FAA) said the Boeing’s 777 left engine – manufactured by General Electric – burst into flames.

Dramatic images of flight BA2276 were shared on social media by members of the public at the airport, which is five miles south of downtown Las Vegas.

Guardian reporter Jacob Steinberg was on the plane and tweeted about the evacuation: “Just evacuated on a British Airways flight at Las Vegas airport after an engine caught fire. Don’t think anyone hurt.

“Was asleep as the plane took off. Came to a crashing halt. Smell of smoke. Initially told to stay seated, then shout of evacuate.

“Could smell and see smoke but was on other side of plane. One person said fire melted a couple of windows.

“They opened the back door and slide went down and smoke started coming in plane, followed by mad dash to front. A lot of panic.”

Steinberg reported that the pilot came to talk to the evacuated passengers in the airport building, and was met by applause. The pilot told them the fire had been the result of a “catastrophic failure of the engine”.

The first sign of a problem came when one of the BA pilots contacted air traffic control shortly after the plane had begun its take-off procedures: “Speedbird 2276 heavy stopping.”

McCarran airport said the first call alerting it to the emergency had come at 4.13pm local time, and flames were spotted one minute later. The fire was extinguished and all passengers evacuated by 4.18pm.

Airport authorities said one runway had been put out of service, but other flights were operating as normal from the three other runways. Some flights would be subject to delays, they said.

In the wake of the blaze, the FAA ordered all inbound air traffic from several other airports to be held at their points of origin, including San Francisco, Phoenix, Denver, Salt Lake City and Albuquerque, New Mexico. The ground stop was later lifted, although delays were likely.

Passengers from the stricken BA2276 were being taken to the Orleans hotel, near the Las Vegas strip. Steinberg said many were shaking the hand of the pilot, who “looked pretty shook up”.

A spokeswoman for British Airways said safety was the airline’s priority and the airline was looking after customers affected by the incident.

In a letter handed to passengers at the hotel, BA apologised for the incident, saying: “We do not underestimate how distressing the experience has been for you and we have a dedicated team here to help you.”

The airline said passengers might need to be questioned by authorities investigating the blaze. “Once the authorities have completed their interviews, we’ll take you to meet your friends and relatives … We will make all the arrangements to get you to where you need to be.”

McCarran airport is the ninth busiest in the US and saw nearly 43 million passengers pass through it last year.

The aircraft model was identified as a 275-seat B777-200, a long-range twin jet which operates on longhaul routes for BA, one of the world’s largest operators of the type.

Boeing said it was “aware of the incident at McCarran airport in Las Vegas”, adding: “Our teams are currently gathering more information.”

In January 2008, a British Airways 777 flying from Beijing crash-landed short of the runway at Heathrow airport, injuring 47. A report found the crash was probably caused by a buildup of ice in the fuel system, which restricted fuel flow to both engines.

In March 2014, a British Airways plane heading to Lyon, France, was forced to turn back to London Heathrow after flames were seen “spitting” from the engine of the Airbus A319. The previous year another A319, destined for Oslo, was also forced to return to Heathrow with smoke pouring from an engine.

A report into the London-Oslo incident found that staff “compromised by fatigue” had left unlatched the covers of the Airbus engine, the fan cowls, during maintenance.