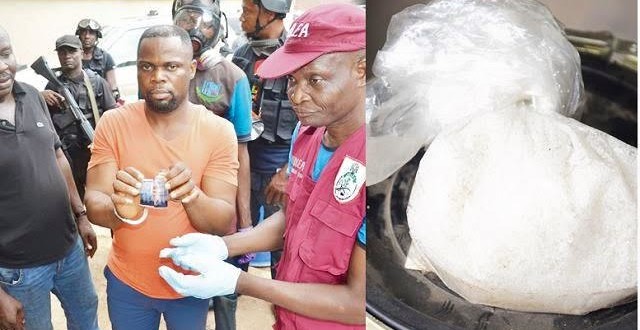 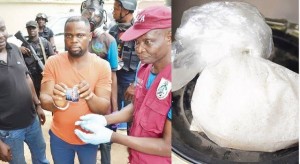 By Patrick Aigbokhan
Sylvester Chukwuwendu, a notorious drug baron, who is suspected to run an international drug syndicate has been nabbed by operatives of the National Drug Law Enforcement Agency (NDLEA).
Chukwuwendu, 37, who specializes in sponsoring couriers, especially females, to countries like China, Indonesia, Malaysia, Turkey and South Africa, is also said to be the biggest producer of methamphetamine, a particularly dangerous and killer hard drug in the country.
He was arrested after many months of surveillance on his activities by the agency.
Addressing journalists on the arrest of Chukwunwendu, Ahmadu Giade, Chairman, NDLEA, said the suspect was arrested at Ozubulu in Ekwusigo Local Government Area of Anambra State, based on intelligence report received by the agency on April 23, 2014.
Giade said Chukwuwendu was deeply involved in unlawful exportation of illicit drugs and running a methamphetamine production laboratory in his house at No. 2, St. James Close, Ajao Estate, Isolo, Lagos.
Also known as ‘Blessed’, Chukwunwendu owned a laboratory where the illegal drug was produced and he is the leader of an international drug trafficking organization, which recruits and sponsors drug couriers to foreign countries.
According to Giade, the suspect runs several businesses as a front for his criminal activities.
Some of his companies include Blessed Benita Global Ltd, Ideal Motorcycle Company Ltd and God’s Special Enterprise Ltd. Some of his couriers to China, Malaysia, Turkey and Italy were usually paid an average of $5,000 per trip.
The suspect hired one Raphael, a professional methamphetamine cook, to work for him.
According to information gathered, Raphael is paid N500,000 for his service and N700, 000 for the purchase of precursor chemicals per production cycle.