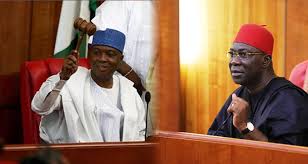 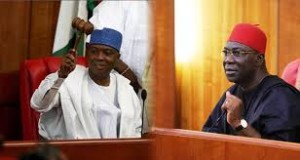 A Federal High Court in Abuja Monday struck out the suit that sought to remove the Senate President Bukola Saraki and his Deputy Ike Ekweremadu from office on grounds that the Senate Standing Orders 2015 that produced them was forged.

The plaintiffs, all members of All Progressives Congress (APC), also urged the court to stop the two defendants from relying on the provisions of a forged Senate Standing Orders 2015 to conduct the affairs of the Senate.

They were all members of the Senate ‘Unity Forum’ which supported Ahmed Lawan to emerge as the Senate President in the election won by Saraki on June 9.

Justice Gabriel Kolawole, who presided over the matter as a vacation judge, on July 28 declined to issue an interim order of injunction against Saraki and Ekweremadu.

At the resumed sitting on the case, Chief Osuman, said the plaintiff’s decision to discontinue further hearing in the matter was because the essence of the suit had been overtaken by events.

The plaintiffs said Saraki and Ekweremadu had carried out several legislative actions despite the pending suit such as constituting different committees for the 8th Senate.

Specifically, the plaintiffs had prayed the court to stop both Saraki and Ekweremadu from further exercising the powers of the Senate President and Deputy Senate President, respectively.