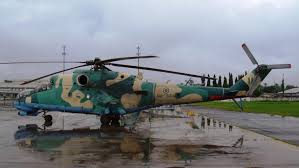 A Nigerian Air Force (NAF) helicopter has crashed at the old site of the National Defence Academy (NDA) in Kaduna, Channels TV has confirmed.

It is said that the helicopter had seven people on board. Though emergency officials are already performing search and rescue operations, it is not known if there were any survivors.

The plane which fell between two houses in the Cantonment, consumed one of the houses as it went up in flames on impact.
‎The plane, Donnia 228 was on a routine mission to Abuja from Kaduna.
The site of the crash has been cordoned off by military personnel who stopped people from getting close.
Spokesperson of 1 Division Headquarters of the Nigerian Army, Colonel Abdul Usman confirmed the incident and the number of casualties.

Share
Previous SGF: How Fashola Was Schemed Out
Next Obasanjo Is A Liar, Economic Illiterate I Have No Respect For – Wole Soyinka