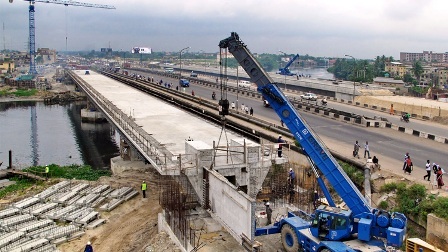 The Federal Government has started a review of the cost of the Second Niger Bridge with a view to determine its true contract value.

The project had been estimated to gulp about N130 billion out of which the immediate past administration of former President Goodluck Jonathan said it spent N10 billion as at January this year.

The Director General of Infrastructure Concession and Regulatory Commission (ICRC) Aminu Dikko who gave the hint after meeting with President Muhammadu Buhari in Aso Rock noted that the Ministry of Works was currently reviewing the Second Niger Bridge contract to ascertain the actual cost.

He said apart from knowing the actual cost of the project, there were other issues that needed clarification before meaningful progress could be made on the project.

He listed the issues to include claims by the host communities that their land was taken without due compensation and the allegation by the Onitsha Traditional Council that they were not fairly represented in the transaction.

Speaking to journalists, Dikko said, “The Second Niger Bridge is one of the projects that we discussed with the President. We did say yes, it is in the commission for regulatory oversight. We have been discussing the transaction with the Ministry of Works.

“But before it can be finalized, the commissioner has to give a certificate of compliance, but we haven’t done that because we have seen a lot of issues that we are uncomfortable with. We are talking with the Ministry of Works for them to correct it.

“These kind of issues, we are not saying that something has not been done properly but, we need to be convinced that these few problems are
sorted out properly. We will also talk about the actual cost of the bridge. Eventually, we have asked the Ministry of works to review it and justify how much the project should cost.”

The ICRC boss noted, however, that he was not in a position to determine the current status of the project since so much preliminary work was not yet done.

He urged Nigerians who had been insisting on the completion of the project to be patient, adding that PPP projects could not be completed speedily like normal contracts where money is made available to contractors after they are awarded.

His words: “For the Second Niger Bridge there will be a lot of studies that needs to be done on the integrity of the bridge itself which will take time. It is not something we can see being completed in the next six months.

“I will like us to be patient about it, we know that it is a critical road, we also know how Nigerians suffer during festive holidays and we hear people sleep on that old bridge. The time has come for us to bring succour to Nigerians”.

On President Buhari’s response to his briefing on the activities of his commission, Dikko said the President issued two directives on the 33 silos built across the country and the need for MDAs to include project development in their budgets.

He said, “What the President has directed is that we should involve the state governors to see how best they can encourage their farmers to utilise these silos when they come into effect.

“The President directed that MDAs should ensure that they have adequate funding for development of projects in their budgets, and if they don’t, they should look for alternative ways of getting such funding”.