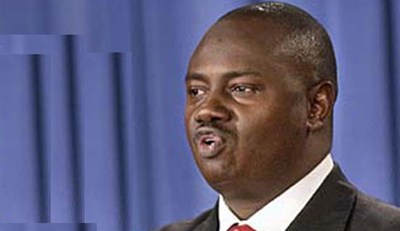 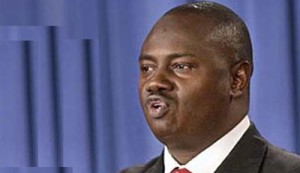 The Senate Committee on Ethics, Privileges and Public Petitions will on Wednesday begin probing Mr Ibrahim Lamorde, Chairman of the Economic and Financial Crimes Commission (EFCC), over a scurrilous allegation that he fraudulently diverted over N1tn proceeds of corruption recovered by the anti-graft agency.
Mr. George Uboh, the petitioner alleged that the EFCC boss diverted sums including the loot recovered from former Bayelsa State governor Diepreye Alamieyeseigha and ex-Inspector-General of Police Tafa Balogun.
The petitioner’s complaint to the Senate prompted the probe and the lawmakers invited Uboh to appear before the Senate committee at Meeting Room 120 of the New Senate Building, National Assembly Complex, Abuja, by 10am on Wednesday.
A similar invitation was extended to Lamorde to appear before the Senate committee at the same time.
The fraud allegedly perpetrated by Larmode was said to have dated back to his days as the Director of Operations of the EFCC between 2003 and 2007, as well as acting Chairman of the commission between June 2007 and May 2008, when the then chairman of the anti-graft agency, Mr. Nuhu Ribadu, was away for a course at the National Institute for Policy and Strategic Studies, Kuru, Jos.
Uboh, Chief Executive Officer of Panic Alert Security Systems, a security firm, in his petition dated, July 31, 2015, accused Lamorde of some specific instances of under-remittance and non-disclosure of proceeds of corruption recovered from criminal suspects, including Balogun and Alamieyeseigha.
He assured the Senate that he would produce “overwhelming evidence” to back his claims against Lamorde.
Uboh also alleged that the EFCC had not accounted for “offshore recoveries” and that “over half of the assets seized from suspects are not reflected in EFCC exhibit records”.
The petitioner equally accused Lamorde of conspiring with some EFCC officers and external auditors “to operate and conceal a recovery account in the Central Bank of Nigeria and excluded the balances from your audited financial statements between 2005 and 2011.
“Lamorde continues to conceal the details of the unsold properties forfeited by both Tafa Balogun and DSP Alamieyeseigha despite receiving rent revenues from some estate agents on the said properties,” he further alleged.
Alamieyeseigha, the man who former president Goodluck Jonathan succeeded as Bayelsa State governor in 2005, had forfeited property and funds in various bank accounts as part of terms of plea bargain in his trial by the EFCC.
He had pleaded guilty to six counts of corruption charges before a Federal High Court in Lagos on July 26, 2007 and served concurrent two years imprisonment on each count, though he was later pardoned by Jonathan in 2013.
Balogun had also forfeited landed assets and funds and was sentenced to six months imprisonment by a Federal High Court in Abuja after he pleaded guilty to various counts of corruption charges.
Uboh, asked that Lamorde be prosecuted and proposed 10 counts of fraud in his petition, which was addressed to the Senate President Bukola Saraki, through the Delta State Senator in the National Assembly, Peter Nwaoboshi.
In the petition bearing Nwaobohi’s acknowledgment, Uboh alleged that Lamorde in March 2013 diverted N779m out of the total N3bn forfeited by Balogun to the Federal Government and that the EFCC boss conspired with some officials of the anti-graft agency to under-remit the ex-IG’s forfeited funds of about N5.85bn into the Consolidated Revenue Account by holding back about N2.65bn.
Uboh also alleged that Lamorde conspired with some EFCC officials to remit to Bayelsa State N3.1bn instead of the total sum of N4.3bn proceeds of corruption recovered from Alamieyeseigha.
The petitioner said that Lamorde, as Director of Operations of the EFCC, conspired with some officers of the commission to manipulate records of assets recovered from Alamieyeseigha, an act which allegedly paved way for him to trade with about N3.7bn of the recovered funds for almost two years.
“Sir, the aggregate funds diverted by Lamorde/EFCC stated below in the attached criminal charges is over N1tn. However, because over 95 percent of overseas seizures are diverted, there is an urgent need to investigate and recover those funds as well,” Uboh’s petition read in part.
A copy of the letter of the Senate Committee on Ethics, Privileges and Public Petitions signed by the committee’s clerk, Freedom Osolo, invited Uboh to Wednesday’s meeting.
The letter of invitation entitled, ‘Invitation to a meeting of the Senate Committee on Ethics, Privileges and Public Petitions’, partly read, “I am directed to invite you to a meeting of the Senate Committee on Ethics, Privileges and Public Petitions of the National Assembly in respect of your petition against the Economic and Financial Crimes Commission Chairman, Mr. Ibrahim Lamorde.”
“You are by this invitation, required to appear before the committee with all necessary evidence to support your allegation,” the invitation letter also noted.
Part of the proposed charges prepared by Uboh read, “That you, Mr. Ibrahim Lamorde, as the executive chairman of EFCC in March 2013, in the bid to conceal a fraud of N779,155,004:62, being the diverted amount from the forfeited funds by Tafa Balogun, falsified documents in response to the request made on you by duly constituted authorities, wherein you fraudulently stated the total of 13 bank balances as N2,258,100,576:98 instead of N3,037,255,521:60
“That you Mr. Ibrahim Lamorde, as the Director of operations, conspired with some officers in the EFCC to manipulate the forfeitures and recoveries from DSP Alamieyesiegha, which events took place between 2006 and 2007, as if it took place in July 2008, with a view to shifting responsibilities to the regime or tenure of Mrs. Farida Waziri. By this act, you traded with recoveries amounting to over N3.7 bn for almost two years before formerly documenting the transaction.”
When contacted, the spokesperson for the EFCC, Mr. Wilson Uwujaren, said, “I am not aware of (the petition).”
-ThePunch