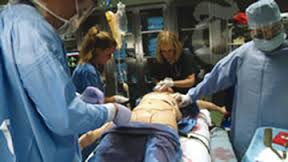 Inspector-General of Police Solomon Arase has directed hospitals to give medical care to victims of gunshot wounds.
The unwritten rule of Nigerian hospitals is to deny people with gunshot wounds medical care for fear of being implicated in armed robberies and other violent crimes till the police report is secured.

But on Friday, Arase enjoined citizens, including medical personnel, to first attend to accident victims and persons with gunshot wounds and thereafter inform the police for necessary action.

“This became imperative, following neglect and consequent untimely death of victims in this regard out of fear of being implicated without police involvement,” Emmanuel Ojukwu, Police Spokesman said.

The Police High Command also directed its officers and men not to harass good Samaritans/Nigerians in this regard, but endeavour to elicit correct facts in relation to incident from them.

“Doctors on duty are equally duty-bound to treat victims of gunshot wounds and also inform police of relevant facts. The safety of Nigerians is a collaborative effort of all and sundry,” Ojukwu added. “Police therefore, enjoin citizens not to relent in their cooperative attitude in ensuring safety of all. While they are also to report any suspicious person or persons to the nearest police station.”
-The Cable