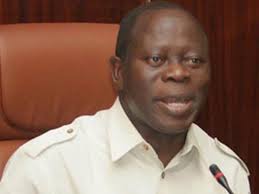 Edo State Governor Adams Oshiomhole on Tuesday said the Nigeria Port Authority (NPA) spent N160 billion out of the N162 billion it generated in one year and remitted only N2 billion to the government.

Oshiomhole, who spoke at the 8th quadrennial delegates conference of the National Union of Road Transport Workers (NURTW), also said another revenue generating agency of government failed to make any remittance to the Federation Account from the taxes collected, claiming that the money generated was not enough to fund its operations.

The governor spoke just as the President of the Nigeria Labour Congress (NLC) Ayuba Wabba, asked members of the National Peace Committee not to become an obstacle to the fight against corruption and recovery of funds stolen by public officers.

Oshiomhole, who is the Chairman of a committee set up by the National Economic Council to investigate revenue generating agencies, also blasted members of the National Peace Committee and other Nigerians for asking President Muhammadu Buhari not to investigate former president Goodluck Jonathan because he conceded defeat in the March 28 presidential election and handed over power to the President.

He said: “Last week, somebody told us that the Nigeria Port Authority admitted that it collected N162 billion in one year and spent N160 billion out of that and remitted N2 billion to the Federal Government.

“Is that justice? Can you have peace in the face of this kind of abuse?”