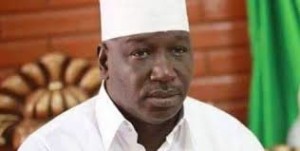 Maiduguri, the Borno state capital, was Saturday thrown into grief following the news of the death of the state deputy governor, Zannah Umar Mustapha, who died in his sleep while on official duty in Yola, Adamawa State capital.

The late deputy governor, who left Maiduguri for Yola at about noon on Friday, was expected to represent his principal, Governor Kashim Shettima, at the convocation ceremony of Modibbo Adama University of Science and Technology (MAUTECH), Yola. Also on his itinerary during the visit was to put in place measures to facilitate the evacuation of Internally Displaced Persons (IDPs) from Adamawa to Borno state.

Those with him at the airport at the time of his departure said he was hale and hearty before he boarded his last flight out of Maiduguri.

Sources close to the family said the deceased deputy governor had been managing a heart-related ailment and had recently complained of having some slight pains in his chest.

One of his close aides who accompanied him to Yola, said, “Oga (boss) was in a normal state all through our trip from Maiduguri to Yola. When we got to Yola, he was still his usual active self till we retired back to the hotel where he lodged. He later informed us that we could go to our respective lodges to rest for the day, with instruction that we should all be ready and back at the hotel premises where he lodged by 7:30am, so that we would set out for the day’s engagement at 8am. We all bid him goodnight and left. In the morning (Saturday), we came back to the hotel and asked the details that were left to guard him if Oga had woken up and they said he had not. In fact, they said he did not even come out for the early morning prayers at 5am.

“So, we waited but when it was a few minutes past 8am, we became worried and decided to go and knock on the door to be sure he was okay. We knocked, but no one responded; we continued knocking and there was still no response. Then, one of the security aides decided to go round the hotel to the window of his apartment and tried to peep in. It was then we were able to see him lying on the bed, but not responding to our calls. We again knocked on the window but he still didn’t respond. It was at that point that we called on the hotel manager to open the door using the master key and when we entered, we found him lying face up, clutching a pillow to his chest.”

The aide, who spoke on condition of anonymity, since the police in Adamawa have opened investigation into the matter, also said doctors that examined him had explained that the whitish foam mixed with traces of blood which was seen coming out of his mouth, may not be unconnected with suspected heart failure.

The late deputy governor’s wife was on a trip to US at the time her husband died. She is expected to return home at once.

When contacted the spokesman of the Adamawa Deputy Governor Samuel Gwanja confirmed that the late Borno deputy governor was taken to the hospital.

“It is with deep sense of utter shock and disbelief but with complete submission to the will of the Almighty Allah that the Borno State Government hereby announces the passing away of His Excellency, Alhaji Zannah Umar Mustapha, the Deputy Governor of Borno State,” said the SSG in the statement.

“He died in his sleep this morning in Yola, Adamawa State where he was to represent Borno State Government at the convocation ceremony of Modibbo Adama University of Science and Technology, Yola. He was also scheduled to follow up on his earlier visit to Yola, in connection with the welfare of Borno State citizens internally displaced as a result of the Boko Haram insurgency.

“His remains would be brought to Maiduguri for funeral at the Government House, Maiduguri at 4pm Saturday. He will be buried in Maiduguri. His Excellency, Hon. Kashim Shettima, the Executive Governor of Borno State, expresses his heartfelt condolence to the family of the Deputy Governor and the entire people of Borno State for the irreparable loss and appealed for prayers for the repose of the soul of our late Deputy Governor.”

The late deputy governor who died at the age of 49 was a Naval personnel before he resigned in 1993. He became the chief executive of a clearing and forwarding business he set up in Lagos. He later joined politics with the return of democracy in 1999 and contested for the position of Chairman of Biu local government council on the platform of the Peoples Democratic Party (PDP) but lost the contest.

He later became the chairman of the National Library Board after the 2007 general elections, when he lost a contest as deputy governor. He attempted running for the same deputy governorship ticket with Alhaji Kashim Imam on the platform of the PDP in 2011; but they both lost at the primaries, after which he decamped from PDP and formed an alliance with the ANPP, on which platform he became the running mate of incumbent Governor Shettima and they won the election. He re-contested the position in 2015 on the platform of the APC alongside Shettima, and won for a second term.

Zannah Mustapha would be remembered for his legendary loyalty to his boss, his bluntness in addressing issues, both private and public, and for his zero tolerance to failure in every duty he was assigned to carry out.

Before his sudden death, he was appointed this year’s Amirul Hajj for Borno State pilgrims, an appointment he has held in the past three years.

He was usually referred to as the most loyal and most powerful deputy governor ever produced in the political history of Borno State.

His last engagement in the state was the inauguration of the 2015 Amirul Hajj committee in his office on Wednesday, before travelling to Yola, the Adamawa state capital on Friday, where he died in his sleep. He was the first serving state deputy governor to die while in office.

He is survived by his wife and three children.

The death of the late Zannah was announced on Saturday morning at about 9am when his aides made a chilling call from Yola to the Borno State Governor Kashim Shettima, informing him that his deputy had died in his sleep.

According to unverified sources, an immediate autopsy that was carried out at the Federal Medical Centre, Yola revealed that he died of a heart related ailment.

Shettima was said to have broken down in deep grief upon receiving the news of the man he fondly referred to as Mazan-Fama, meaning Man of Valour, in appreciation of the deceased’s courage and ability to execute all tasks assigned to him.

The flags in Government House, Maiduguri and other government offices in the state were flown at half-mast Saturday, in honour of the deceased deputy governor, whose corpse arrived the Maiduguri International Airport at 4:10pm and was immediately received by Governor Shettima, the deputy governor of Yobe State, Engr Danlami Aliyu and other top government officials of the two states.

The deputy governor of Adamawa state led the delegation that brought the corpse from Yola.

The corpse was immediately taken to Lodge-9, which is the official residence of the Borno State deputy governor where it was removed from the casket and given the final ritual bath. The remains of the late deputy governor were later taken to Borno state Government House where the final interment prayer was held in a large congregation, led by the Imam Idayn of Borno, Imam Adam Asil Ibn El-sunusiya.

Those at the funeral prayer included the Borno state governor, the deputy governors of Adamawa and Yobe states, the national security adviser, Major General Babagana Monguno (rtd) and all the service chiefs, former senators and serving House of Reps members as well as the members of the state House of Assembly.

His remains were later taken to the Maiduguri Cemetery where it was interred at the designated place for important figures.

Prince Uche Secondus, the acting National Chairman of the Peoples Democratic Party (PDP), condoled with the government and people of Borno state over the death of the Deputy Governor of the state.

Chief Olisa Metuh, PDP National Publicity Secretary, in a statement, said the party was shocked by the sudden death of the deputy governor.

The statement noted that the condolence by the acting chairman was on behalf of the National Executive Committee (NEC) and the PDP family nationwide,

The PDP commiserated with Borno State governor, the Mustapha family, the people of Borno State and the All Progressives Congress (APC) family for the loss, while praying God to grant the departed eternal rest.

The governor in a condolence message by Mr. Habib Aruna, his Chief Press Secretary, said he shares in the sorrow of his brother, Governor Shettima, over the sad occurrence, noting that the late Mustapha was a loyal, diligent and dedicated deputy governor.

“As a brother governor, I feel completely overwhelmed just imagining the depth of your pain and anguish at the death of a most loyal, dependable and diligent deputy who you had in Alhaji Mustapha,” the governor said.