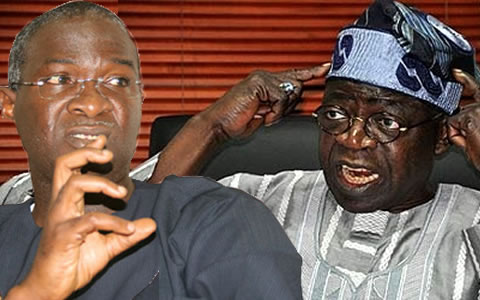 The face-off between two ex-governors of Lagos State Babatunde Fashola and his predecessor Bola Ahmed Tinubu deepened on Friday with reports that loyalists of both gladiators have drawn up battle plans, while stakeholders in both the All Progressives Congress (APC) and Lagos State are said to have waded in, calling for a truce.

A former member of the Lagos State Executive Council who did not want to be named, told Saturday Tribune that “some elders are planning a peace meeting between the duo.”

Investigations revealed that  forces loyal to Tinubu felt incensed by the statement issued by Fashola on Thursday in which he insinuated that corruption allegations were being pinned on him by those opposed to his getting a Federal appointment, a veiled reference to Tinubu and the incumbent Governor Akinwumi Ambode.

“The coming days will be interesting,” an aide to a chieftain of the APC close to both leaders said.

While the Tinubu camp is said to have vowed to fight on to teach the immediate-past governor a lesson, the Fashola side of the divide “is determined to ensure that his integrity is not tainted by those who are jealous of his ascendancy in the polity.”

However, on Friday both sides refrained from taking direct shots at each other. Tinubu’s spokesman, Mr Sunday Dare, when contacted by phone said that he had just arrived in the country and would need time to get briefings from his boss before reacting to the statement from Fashola while Ambode’s Chief Press Secretary Habib Aruna did not answer repeated calls made to his telephone line.

Dare later sent a text message at 6:30pm that he would call back soon. He did not.

However, an aide to Ambode who spoke on condition of anonymity, sasid it was too simplistic for anybody to think that the government headed by Ambode, was behind the ongoing corruption charge campaign against former governor Fashola in order to rubbish his record of achievements while in office for eight years.

“Ambode is not interested in the smear campaign against Fashola; it is a non-issue. It is too simplistic to suggest that. It is left for people to find out who is doing this. I can tell you that government is not involved. It is not possible for government to have a hand in it.

“The governor is a pragmatic person and ready to move on by restructuring the state,” the close source said.

Fashola is currently in the eye of the storm as a group, Coalition Against Corrupt Leaders (CACOL), has dragged him before the anti-graft agency, the Economic and Financial Crimes Commission (EFCC), calling for him to be investigated for a scam over a contract for the upgrade of his personal website at a cost of N78 million.

The former governor, has, however, set the record straight, declaring that the state government, through the procurement office, did not disclose the details of the website upgrade to include some other aspects making up the entire contract sum.

Fashola, who denied having children outside wedlock apart from the three he adopted following the DANA plane crash, also denied involvement in the National Assembly crisis, saying that he only landed in the country on the day of the crisis.

Moreover, Fashola, who served for eight years as governor, might have incurred the wrath of a lot of people within the APC and outside it, some of whom felt he is “too arrogant” and now want to take their own pound of flesh.

Other sources said Tinubu is determined to block the chances of Fashola from becoming a minister in the yet-to-be formed cabinet of President Muhammadu Buhari due to his “newfound independence.”

This determination might have prompted Fashola to declare in his published statement that he was not looking for a job: “For those who still wish to remain in the mud, they should look in the mirror. For those who wish to throw mud at me, they should look at their own hands. As for me, I have moved on. My job is done,” even as he threw a broadside at his opponents that, “When you wrestle with a pig, the pig gets happy and you get dirty.”

Another source also claimed that “Tinubu’s supporters could even be the ones fighting back because of the perceived ill-treatment Tinubu suffered at the hands of Fashola while he was governor of the state.”