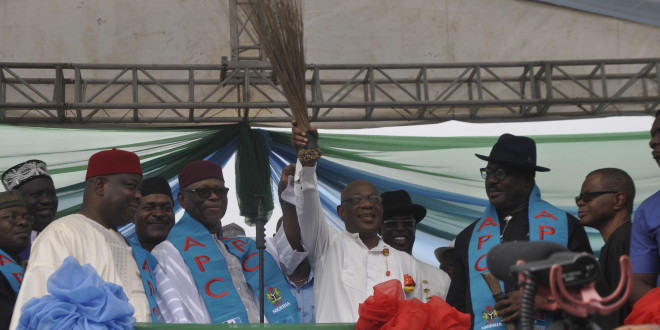 APC Set To Take Over Bayelsa As Alaibe, Lokpobiri, Seibarogu, 1,500 Others Dump PDP

The All Progressive Congress (APC) on Saturday received 1,150 new members in Bayelsa State ahead of the December 5, 2015 governorship election in the state.

NAN reports that all the new members defected from the Peoples Democratic Party (PDP).

Others were Sen. Heineken Lokpobiri and a former member of House of Representative, Mr Nadu Karibo.

Mr John Oyegun, APC’s National Chairman, who welcomed the new members at a mega-rally in Yenagoa, commended them for their courage to dump the PDP and embrace change.

“Today’s mega-rally in Bayelsa is very unique in the history of APC in South-South region of Nigeria; the number and prominent people we have received toady is very amazing.

“APC is making history not only in Bayelsa but for the South-South political zone; I believe by December 5, we will have more progressive states in this zone.

“For those, who have defected, I promise you that you have found a new home for the progress and betterment of Bayelsa,” Oyegun said.

Mr Timipre Sylva, APC Leader in the state, also commended the new members, saying that the party was prepared to take over the Governorship by December 5.

Sylva, a former governor of the state, said that the forthcoming gubernatorial election was a wakeup call to the people of Bayelsa, stressing that it was time to unite for change.

Also speaking, Mr Timipa Orunimighe, APC Chairman in the state, called on the people to form alliance with the party in order to move the state forward.

“I believe that the road to freedom from backwardness have come to our door; we need government that can bring change and attract investors,” Orunimighe said.

In his comment, Alaibe said that his decision to leave PDP was to encourage the platform of change for the good people of Baylesa

“I have joined APC and we are going to sweep out deceit, oppression, economic stagnation, and undemocratic ways of the PDP come December 5,” the former NDDC boss said.