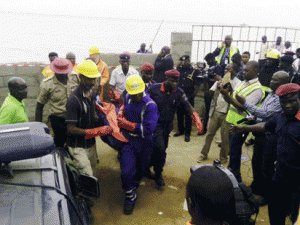 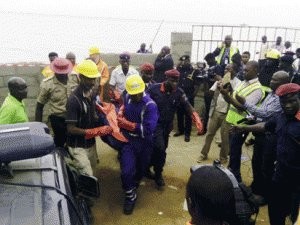 The Nigerian Maritime Administration and Safety Agency (NIMASA) have restated its commitment to Search and Rescue (SAR) operations in the nation’s maritime domain.
The Agency was part of the team that participated in the search and rescue operations of the crashed Bristow helicopter at the Oworoshoki end of the Lagos Lagoon yesterday that lasted several hours alongside other Government Agencies. Six of the twelve passengers on board were rescued alive, while bodies of the two dead crew were also recovered.
In a statement by NIMASA’s spokesperson, Hajia Lami Tumaka, she said the agency’s involvement in the rescue operation was in line with core mandate of the Agency.
She said the officers of the Search and Rescue unit of NIMASA immediately swung into action with one of the SAR boats “NIMASA BENUE” to support rescue operations at the site of the incident.
She said the Acting Director General, Mr. Haruna Baba Jauro who described the incident as unfortunate commiserated with the families of the victims and the management of the operators of the ill-fated craft.