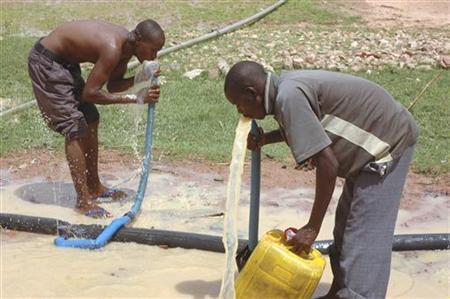 Villagers drink water from a hose in a polluted river in Dareta village, in the northern state of Zamfara, June 4, 2010. Lead poisoning caused by illegal gold mining has killed 163 Nigerians, most of them children, in remote villages in the past few months, a government official said on Friday. REUTERS/Stringer

Civil society groups, labour unions, activists, and human rights groups from across Nigeria and around the world have converged in Lagos on Tuesday for the first of a two-day summit on public water supply with the theme, “Our Water; Our Right.”

The event will end with a communique calling for an end to the World Bank’s promotion of water privatization and investments in public alternatives that uphold the human right to water.
The summit comes amid a growing movement across Africa, and from Detroit in the United States, to Manila in Philippines, opposing the commodification of water and plans to privatize water systems.

Concerns over plans to privatise water supply in Lagos has drawn global concern and support, including from members of U.S. Congress.

The summit will witness a convergence supporting lead host – the Environmental Rights Action/Friends of the Earth Nigeria (ERA/FoEN). Dozens of local, national, and international labour union member participants will also bring their insights into cases of layoffs and the poor employment conditions for workers associated with privatization exemplified by Nigeria’s Power sector’s privatization failure.

International participants include Mae Buenaventura from Manila, Philippines, where the World Bank facilitated a privatization project in 1997 and Shayda Naficy and Nathaniel Meyer of Corporate Accountability International.

ERA/FoEN Executive Director, Dr Godwin Ojo said: “Access to water without the trappings of privatisers is non–negotiable. This summit is intended to debunk the myth behind public private partnerships and harness the skills of our local and international allies to promote the public-public partnership that guarantees everyone has access to water regardless of ability to pay for it.”

Shayda Naficy, Campaign Director with Corporate Accountability International said: “The goal of any water system is to provide the water people need to survive, not earn profits for the corporate water industry. It’s time for the World Bank to end its dogmatic promotion of water for profit and support democratically controlled and publicly owned water systems, which is what the people of Lagos are demanding.”

In October 2014, the “Our Water, Our Right” coalition launched a campaign to compel then-governor Babatunde Fashola to reject a large-scale public-private partnership water management plan. Just weeks later, the World Bank’s private arm, the International Finance Corporation, indicated via email that its proposed role as transaction advisor for the project had been cancelled, followed by a public statement in January.