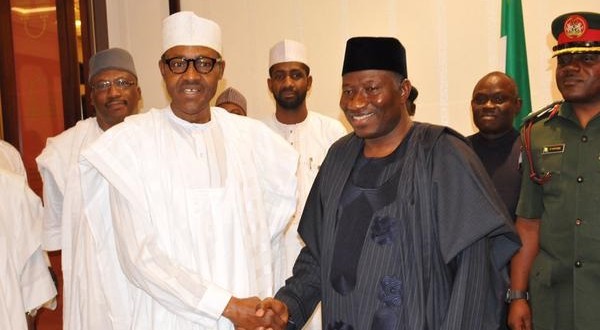 Buhari to Jonathan: Looted Funds Must Be Returned

August 10, 2015 Comments Off on Buhari to Jonathan: Looted Funds Must Be Returned 16 Views 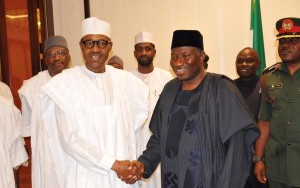 Thursday night’s meeting at the Villa was at the instance of the 2015 Elections Peace Committee, following complaints by Jonathan that the President was not sticking to the peace accord they signed.

Jonathan also sought for understanding on alleged corrupt practices and mismanagement of funds under his administration, it was learnt.

A source said Jonathan claimed that he was hearing about some of the graft allegations for the first time.

But Buhari was said to have insisted that all looted funds must be returned to the nation’s coffers.

He also restated his pledge that Jonathan had nothing to fear at all, according to a source who pleaded not to be named because of the “sensitivity” of the matter.

The outcome of the session was said to have informed Vice President Yemi Osinbajo’s declaration at the weekend that the Buhari administration’s anti-corruption battle was not targeted at Jonathan.

According to the source, the parley was arranged by Abdulsalami.

Jonathan was uncomfortable that Buhari had moved against his ex-Chief Security Officer (CSO), ex-National Security Adviser (NSA) and some ministers.

The source said Jonathan asked the Abdulsalami Committee to prevail on Buhari not to “rubbish” him.

The source said: “For some weeks, Jonathan has been in the country to iron out some issues on his government.

Based on Jonathan’s complaint, Abdulsalami made efforts – five times- to get in touch with Buhari but the ex-Head of State could not get through on time. I think Buhari already had security reports on Jonathan’s emissary.”

At a point, Abdulsalami expressed his frustration to some former Presidents who also prevailed on Buhari to give the committee a chance to mediate.

The source added: “This was how Abdulsalami succeeded in securing an appointment from Buhari for Jonathan with a caveat that the immediate past President should feel free to bare his mind.”

Giving an insight into the talks, another source said: “Jonathan said he was hearing some of the allegations, especially financial sleaze, against his administration for the first time. He made it clear that he had nothing to do with some of these corrupt practices.

“He said whatever steps or actions the President intends to take; it should be within the framework of the peace accord the two leaders signed. Obviously, he wanted soft landing.

“He also pledged to cooperate with Buhari as much as possible on all steps he is going to take.”

Buhari, it was gathered, restated his pledge that Joanthan had nothing to fear. But he said there was no going back on the recovery of looted funds.

“The President reassured Jonathan that he has no personal agenda against him. But he insisted that whatever was stolen from the treasury must be returned,” the source said.

There were indications last night that ex-President Olusegun Obasanjo’s visit to Buhari was part of moves to “offer advice” to the President on the issues raised by Jonathan.

When contacted, the Special Adviser on Media and Publicity to the President, Mr. Femi Adesina, said: “I am aware that President Buhari met with ex-President Goodluck Jonathan but it was behind closed doors. I don’t have the details of what they discussed.”

Some of the issues which made Jonathan to seek peace talks with Buhari are:

probe of $2.1billion illegally withdrawn from the Excess Crude Account without recourse to the National Economic Council(NEC);
whereabouts of $4billion taxes and dividends paid by the Nigerian Liquefied Natural Gas Limited between 2009 and 2014;
how the Nigerian National Petroleum Corporation (NNPC) spent N3.8trillion in three years;
likely trial of some ex-ministers; and
list of looted funds, banks where they are kept and ex-ministers or government officials affected.
The National Economic Committee (NEC) had on June 29 raised a four-man panel on how NNPC spent N3.8trillion in three years.

Awaiting the committee’s report, Governor Adams Oshiomhole joined issues with the immediate past Minister of Finance Dr. Ngozi Okonjo-Iweala, on how $2.1billion in ECA was disbursed without approval.

He said of the $2.1billion, only $1billion was paid to oil marketers as fuel subsidy and about $1billion used for election purposes.

Although, Mrs. Okonjo-Iweala claimed that the ex-President approved the spending of $1billion, Oshiomhole said Jonathan had no right to do so.

He said any withdrawal from Excess Crude Account ought to be approved by the National Economic Council (NEC).

The Nation had on July 15 published that the ex-President approached the Gen. Abdulsalami National Peace Committee for the 2015 General Election, for protection