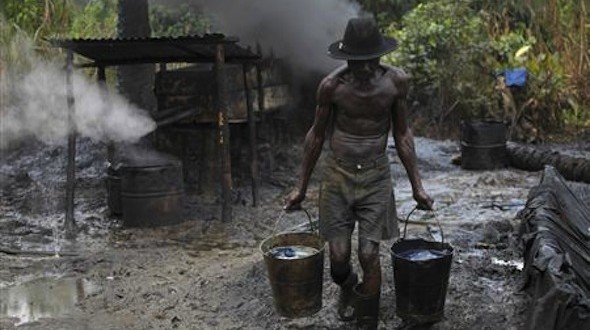 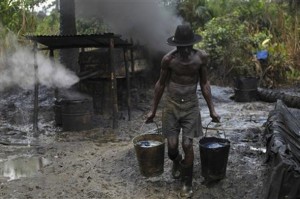 By Patrick Aigbokhan
No fewer than31 illegal oil refineries were destroyed by the Joint Task Force in the Niger Delta, “Operation Pulo Shield,” following multiple raids carried out by the task force in July.
The ‘Operation Pulo Shield’ also arrested 18 suspected oil thieves in the exercise.
Lt.-Col. Isa Ado, Media Coordinator of the JTF in Yenagoa, said in a statement on Sunday, noting that troops of JTF deployed at Iguododo community and Chanomi Escravos in Orhionmwon and Warri South-West Local Government Areas of Edo and Delta States discovered and destroyed 15 illegal refining camps.
The statement stated that the suspects operated with four Cotonou boats, seven plastic reservoirs, 34 drums, 21 surface tanks filled with illegally refined Automated Gas Oil.
It stated that other items discovered and destroyed were 21 cooking ovens and eight pumping machines, but the suspects fled on sighting the troops.
It stated, “The squad also arrested 16 suspects for other criminal offences ranging from kidnapping, armed robbery, sea piracy, cultism and pipeline vandalism.
“Items recovered from them include locally made gun with live rounds of ammunition and axe. The suspects are in custody of the JTF for preliminary investigation before handing them over to prosecuting agency.”
The statement also stated that troops deployed at Ughelli in Delta following a distress call from Afiesere community arrested a notorious armed robbery suspect with a locally made short gun and three live cartridges.
It stated that the suspect, his recovered gun and cartridges, were handed over to prosecuting agency while a stolen motorcycle recovered from him was handed over to the owner.
The statement also stated that JTF in conjunction with Southern Ijaw Oil and Gas Task Force destroyed 16 illegal bunkering sites along Obi creek, Gbenekrukru, Oloma and Ogbonga waterways of Bayelsa and Rivers, respectively.
It stated that the sites were destroyed along with metal tanks and Cotonou boats filled with stolen crude oil.
The statement stated that no arrest was made as the operators of the illicit act fled on sighting JTF troops.
It stated that a notorious and wanted criminal in Oboburu community of Ahoada West of Rivers State had been arrested and taken into JTF custody for preliminary investigation.
The statement stated that items recovered from the suspect included one locally made short gun, Tecno phone and national identity card.