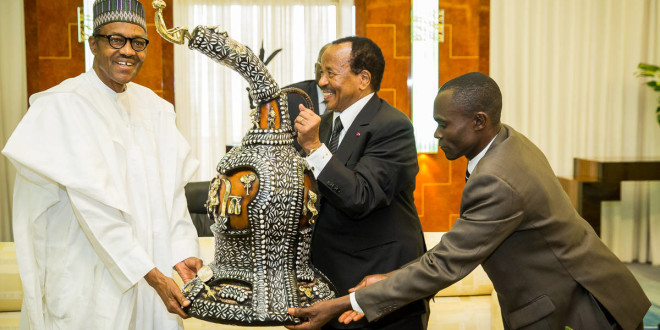 Buhari In Yaounde, Says No Going Back On ICJ’s Bakassi Verdict

July 30, 2015 Comments Off on Buhari In Yaounde, Says No Going Back On ICJ’s Bakassi Verdict 98 Views 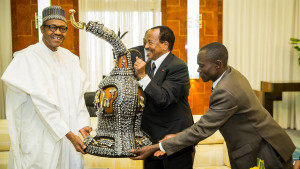 President Muhammadu Buhari has declared in Yaoundé, capital of Cameroon, that as a law-abiding nation, Nigeria would have to live with the verdict of the International Court of Justice (ICJ) which ceded the Bakassi Peninsula to Cameroon.

Buhari was reacting to the complaints by Nigerians residing in Cameroon that they are still being subjected to unjust treatment as if they were aliens in Cameroon, following the ICJ’s judgement.

“Since Nigeria allowed the case to go to court (ICJ), and we lost, we have to abide by it”, the President said in response to a question put to him by a Nigerian on the vexed issue.

Buhari noted that Nigeria’s future is still very bright despite the economic challenges and assured the 4 million Nigerians living in Cameroon that Nigeria is committed to enhancing their welfare and safety in that country.

He also promised that his administration would ensure the faithful implementation of the Green Tree Agreement, which regulates the ceding of Bakassi to Cameroon.

He said, “Fellow compatriots, permit me to say, as I have done during my inauguration on 29th May, 2015, I am committed to bringing positive change to Nigeria and I will do everything possible to achieve that. Despite the numerous challenges confronting us, the future of our country is very bright.

“You all know very well that your fellow Nigerians are resilient, hardworking and patriotic. These qualities have always seen us through our most difficult national challenges and they will do so now.

“However, this government’s job is to see that we unite and work together for the common good of our country. The recent economic downturn occasioned by the fall in oil prices at the global market, which drastically affected our national revenue, is a serious cause of concern to us”.

He noted that his government is yet to articulate a foreign policy for Nigeria beyond what was captured in the manifesto of the All Progressives Congress (APC), assuring however, that adequate measures will be put in place to minimise the shock of the downturn in the Nigerian economy through its diversification.

He said, “As a responsible government, we intend to continue to build a stable economy through prudent fiscal policies and providing favourable environment for both domestic and foreign investments.

“The aim is to guarantee growth and development in all the sectors of our economy, cut waste, ensure fairness and equal opportunities”.

The President, who further reiterated that his administration has taken it upon itself to fight corruption before it kills Nigeria, assured that the current security challenges confronting Nigeria will soon be a thing of the past.

He said, “We are determined to end this callousness against our innocent citizens. The defence of the territorial integrity of Nigeria and the protection of lives and properties of Nigerians and all those who live in the country are our top priorities. We shall explore all reasonable options to enable us to bring this rebellion to an end.

“We are also working with all our neighbours, Cameroon inclusive and other friendly countries, so that together, we can fight and stand firmly against all forms of terror and trans-border crimes. Whereas many successes have been recorded in routing the insurgents and limiting their activities, the war is not over yet”.

Buhari further cautioned Nigerians in that country to be patient and vigilant in order to ensure that youths are not misguided into joining the terrorist groups.

He said that Nigeria’s relation with Cameroon is one of the closest in the sub-region, adding that the federal government of Nigeria places prime importance on the political, socio-economic and security cooperation between the two countries.

The President continued: “That is why we maintain these high level contacts with the government here and the reason why I am here. Nigeria and Cameroon share so much in common and the potential exists for even greater cooperation between our two countries.

“I am delighted to hear of the peaceful relations that exist between you and your Cameroonian hosts. I am very proud of our Nigerians in the Diaspora; wherever I go, I meet extraordinary Nigerians doing great things and contributing positively to developments of their host countries.

On the fight against Boko Haram, President Buhari who assured that the current security challenges are not insurmountable said Nigeria is working with all neighbouring countries, including Cameroon to fight and stand firmly against all forms of terror and trans-border crimes.

Earlier, Mr. Paul Okocha who is one of the representatives of Nigerians residing in Cameroon said that Nigerian companies in Cameroon are playing major roles in the Cameroonian economy.

He appealed to President Buhari to accord priority attention to the completion of a motorable road between Cameroon and Nigeria to boost trade between them.

Another Nigerian in Cameroon, Ebere Valentine, congratulated the President on his victory at the 2015 Presidential election, just as he expressed optimism that Nigeria’s long dream of becoming the true giant of Africa would soon come to pass under Buhari’s administration.

“Your footprints have manifested in Nigeria and beyond since you became the President of Nigeria,” he said.

President Muhammadu Buhari was treated to a grand reception on his arrival in Cameroon for the two-day friendly and working visit.

Buhari had arrived at the VIP wing of the Yaounde International Airport at about 10:50am and was received by President Biya.

From the airport to his hotel room, which is about 25 minutes’ drive, Cameroonians and Nigerians thronged the streets and dotted the road singing, dancing and waving to the Nigerian president.

The excited crowd were, however, prevented from spilling to the road by security operatives that manned both sides of the street.

Shops, doors and gates to buildings close to the roadside were also shut, even as snipers were positioned in strategic areas on the roof top of tall buildings along the road.

Apart from Nigerian and Cameroonian flags that were fixed on both sides of the road intermittently, most of the people also carried banners and placards with inscriptions about the strong ties between the two countries.