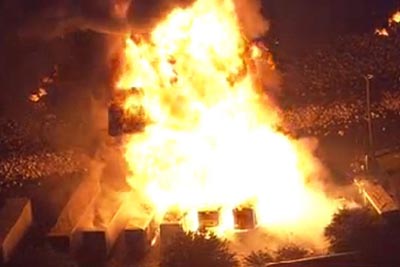 Sporadic gunshots and multiple explosions rocked Damaturu, the Yobe State capital Tuesday evening at about 8pm and forced many residents to stay indoors for safety.

Sources said the sound of gunshots and explosions were heard around Gujiba – School of Nursing Road at the entrance of the town south east of the metropolis.

Unconfirmed reports said a security report earlier revealed that terrorists had concluded a plan to attack the city on Tuesday as troops were busy on alert to ward off any possible attack on the troubled city.

As at the time of going to press, the sound of explosions and gunshots were still on with virtually all streets deserted of motorists and pedestrians.

Earlier Tuesday, 11 Boko Haram militants were killed in clashes with the military in a village in southern Borno State, a local resident and a member of the militia fighting alongside the army said.

Three militia fighters were also killed in the battle.

“On Monday afternoon, around 2:00 pm (1300 GMT), Boko Haram gunmen on motorcycles attacked our village,” said Markus Yohana, a local militia member fighting the Islamists in the village of Dille.

Yohana said that soldiers ambushed the raiders as they tried to flee, killing 11.

“Soldiers went after them and killed 11 of them in the bush,” Damina said.

Boko Haram stepped up its attacks since President Muhammadu Buhari was sworn in in May.

The wave of violence has claimed 830 lives in just two months, dealing a setback to a four-country offensive launched in February that had chalked up a number of victories against the jihadists.

On Tuesday, Nigeria’s military spokesman told AFP that a new regional force tasked with fighting the jihadists will go into action soon.

The 8,700-strong Multi-National Joint Task Force, drawing in Nigeria, Niger, Chad, Cameroon and Benin, is expected to be more effective than the current alliance in the battle to end Boko Haram’s six-year insurgency that has claimed some 15,000 lives.

“Any moment‎ from now, the operations of the Task Force will be manifest.”