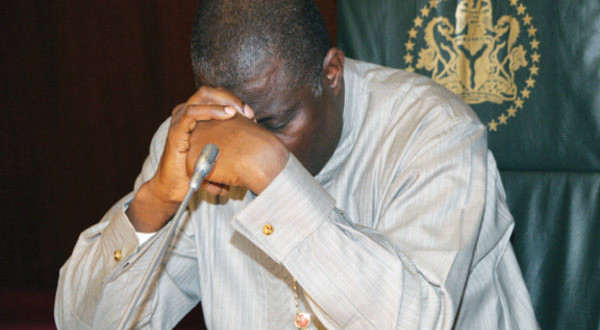 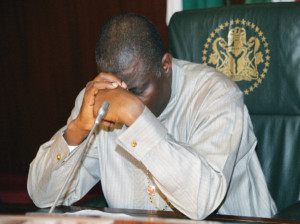 Governors of Edo and Kebbi states, Adams Oshiomole and Atiku Bagudu have stated that the government of All Progressives Congress (APC) was not bent on removal of the Deputy Senate President, Senator Ike Ekwerenmadu of the People’s Democratic Party (PDP) and that a former minister in the last PDP administration cornered as much as $6 billion (N1.2tr).
The governors said that finding a lasting solution to the crisis in the National Assembly from the election of its leadership was paramount to the party and the APC governors.

They said that President Muhammadu Buhari was ready to run an all-inclusive government with PDP federal lawmakers on board.
Both governors spoke Monday during their visit to the Presidential Villa, Abuja.

Speaking first to the State House Correspondents, Gov. Oshiomole said their mission to the villa was to give a report of their meeting with APC Senators to President Buhari.

Oshiomhole added that it was important to recognize some APC lawmakers who were away during the National Assembly leadership election.

He said: “We went there basically to speak about the issue in the National Assembly. The Progressive Governors’ Forum, PGF, asked both of us to try and engage the APC Caucus in the Senate on behalf of the forum.

“And the whole idea is about some challenges in the House and these are nothing new to you. You are familiar with the situation that has produced a Senate President of APC and a Deputy Senate President from PDP and of course the fact that many APC Senators were not present when the elections were held and that they now have what they called quota – a technical issue about whether they formed a quorum or not.

“But whatever position you take, the truth of the matter is that majority of APC Senators were in a location at the invitation of the party waiting for party briefing when elections were held in the Senate and that has produced an upset.

“Now the current effort is to try to see how you would have an all-inclusive leadership in the Senate; that those who were not present, not because they were sleeping, but because they honoured the party’s invitation. By the time they were done, their colleagues have held election in collaboration with PDP senators that were present.

“So, I feel the position now is ‘look, how do you ensure that having elected these two, that the remaining position that are within the discretion of the APC caucus in the Senate are distributed in a way as to give the other group that were shut out of the process a sense of belonging?’ We are convinced that a winner-takes-all in this case won’t work and building peace is making concession and power works better when it acknowledges that even the person who is powerless has a right to exist.

“My brother and I spent some time with the senators last night and we had what I think was a useful conversation. We have come today to report to the President what transpired at those meetings and make few suggestions to him and I think for me there is light, as they say, at the end of the tunnel. One thing is clear, we are all APC family, we are all committed to change.

“We recognise that there are few issues; people may not be comfortable, but we have what it takes to resolve the issues so that in the National Assembly, we will have an APC senate caucus that is united, that is ready to support the change agenda as the President is committed to and work along with PDP.

“Nobody is suggesting that we shouldn’t work with PDP. PDP exists in the house, just as APC had existed in the house under PDP government. So, at some point there has to be a way to engage bipartisanship. So, that is basically why we are here.”

On the significance of President Buhari’s visit to the United States, Oshiomole said he was optimistic it will pay off in due course.

He said: “That was a very wonderful outing. Nigerian Presidents have visited U.S before but I think what is different is the level of engagement and the general attitude and disposition of the U.S government. It is not everyday that you hear from a U.S President right in the Oval Office saying to a Nigerian President ‘you are a man of integrity’.

“And America is confident that any transaction between the American government and the Nigerian government will benefit the Nigerian people. They believe that the stumbling block had been corruption and now they have found a President they trust by reasons of his pedigree, his disposition and his personal lifestyle. America is convinced that he has all the qualities required to fight and to defeat corruption, and once that is out of the way, then America is ready to stand by Nigeria to do what needs to be done.

“President Obama was emphatic that given the size of Nigeria and its population – our location within the continent and the role we have played before – helping Nigeria to overcome some of its challenges would be helping the African continent to reposition itself.

“That is how much things deteriorated and he expressed that this is the result of declining values and all of that. So, with President Buhari, everybody in the White House and the State Departments are all very happy that for once Nigeria has a leader they can engage with.”

He lambasted PDP and other critics of the U.S. presidential visit.

“No, no, no, you have to pity them! We have a President who talks with confidence; not a president that is blabbing and is not sure of what the issues are. He (Buhari) is one that can tell the U.S Senate that look, Nigeria is governed by rule of law. We are not going to do any of those things that is offensive to the culture and tradition of our people.

“We have moved away from a President that doesn’t seem to know his powers to one that understands that he is a President of the country in the continent. So, what do you expect PDP to say? I always say that the day you see armed robbers clapping, you know that things are going wrong.

“When you see them frowning, you know that the security agencies are doing their best. PDP destroyed the country – I mean from the lips of American officials; senior officials of the State departments. They said one minister under PDP cornered as much as $6 billion, and the man said even by Washington standard, that is earth-quaking.

“So, a party that presided over the liquidation of our nation, destroyed all our institutions, converted the Armed Forces commanders to use them as if they were political thugs, converted NTA to a party megaphone, destroyed the SSS, went after opposition as if we were rabbits to be pursued to our holes, compromised even student unions and destroyed everything that you can think of; elevated religion to a state affair; Israel became a place you visit every week; played pastors against mallams, played North against South, East against West just to retain power; elevate Obas and Obis with dollars. You guys were reporting dollars that were changing hands; when NNPC was spending much more money than is available to the Federation account.

Also speaking, his Kebbi State counterpart, Bagudu said their priority was to evolve a federal parliament that would serve Nigerians.

“I think we are not suggesting what should be done or not done. What is important is to realize that the caucus members of the party are desirous of evolving a solution that will bring inclusiveness so that the Senate and indeed, the House will remain bodies that will serve the interest of Nigeria as promised by our party,” he said.