July 18, 2015 Comments Off on North Can’t Be Secure With Ignorant Youths – Sultan 24 Views 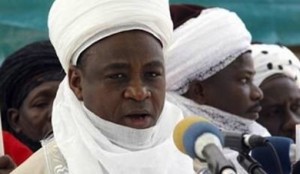 The Sultan of Sokoto and President-General, Nigeria Supreme Council for Islamic Affairs, Alhaji Sa’ad Abubakar III, Friday in his Eid-El-Fitr message called for a law that would compel children in the North to go to school, explaining that the North cannot be secure with ignorant youths.

“We must ensure that parents send their children to school to acquire education because the society will not be secure when majority of its young people are ignorant.

“Parents should therefore send their children to schools to acquire both Western and Islamic education. And for this to be achieved, there will be the need for a law to be enacted by the northern states which would compel parents to send their wards to school,” Sultan advised.

Lamenting the disturbing issues of insecurity in the North, Sultan said it has got to a stage whereby some communities now live in perpetual fear because of the ever-increasing activities of cattle rustlers.

He called on the Federal Government to urgently come out with measures that can halt the nefarious activities of cattle rustlers, describing the senseless killings, maiming, kidnapping and cattle rustling as ugly trends.

“I am appealing to the Federal Government to take proactive measures against cattle rustling in the North, especially in Zamfara and some communities in Sokoto State where people are being killed and their cattle are stolen by rustlers.”