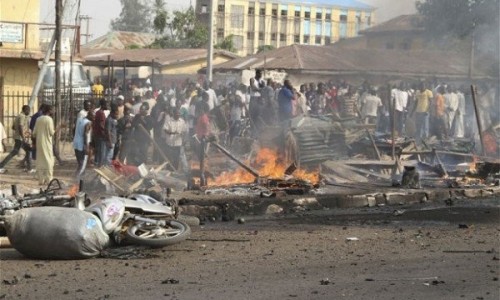 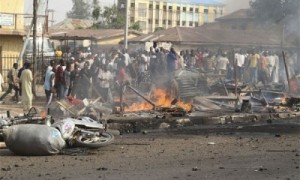 The bombs went off about 8am at one of the Eid grounds located in an area called Phase-1 Secretariat along Damaturu-Maiduguri road.

An eyewitness confirmed that a female suicide bomber got into the prayer ground around 8:00am while many Muslim worshippers had gathered to perform Eid-el-fitr prayer.

He said, “two female suicide bombers then detonated the bombs strapped on them a few meters apart.”

Those most affected were the aid workers who were checking and frisking the bodies of worshippers before they were allowed into the prayer ground. The two suicide bombers were little girls who probably were not even aware of what they were up to,” he noted.

There are about seven Eid prayer grounds in Damaturu.

Though another account of the incident said the blast was at three different locations within Damaturu, Yobe state capital eye witness accounts said “the incident occurred at exactly 7:35am, when people were having their eid-el-fitr prayer.

According to Mallam Ba’aji, not less than 15 bodies were evacuated from the scene of the blast.

He added, “Let me tell you, it was very sad at this very important day of eid-el-fitr prayer, innocent people were killed, we have evacuated 15 bodies from the scene and several others also sustained injuries,” said the witness.

A source from the hospital confirmed that over 10 people were killed and 18 were injured by the bomb blast.

Shortly after the bomb explosion, emir of Fika and Chairman, Yobe State Council of Chiefs, Dr Muhammadu Ibn Abali Muhammed Idrissa, condemned the attack on worshippers in Damaturu, the state capital and described it as barbaric and wicked.

The emir also advised parents to watch the behavior of their children in order to ensure their proper up-bringing and used the forum to appeal to Nigerians to exercise patience in order to enjoy democracy dividends from President Muhammadu Buhari government.

The statement further disclosed that troops and security agencies responded immediately to the incidents.

“The situation is currently under control. The Yobe State Governor, Ibrahim Geidam and the Chief of Army Staff, Major General Tukur Yusuf Buratai have sympathised with the victims and the people of the state and urged residents to stay calm and be security conscious at all times.

“No amount of terrorist acts would deter our resolve to stamp out terrorism and insurgency in our fatherland”, he said.

We will stamp out insurgency in Nigeria – Osinbajo

The Vice President, Professor Yemi Osinbajo has reiterated the determination of the current administration to stamp out the menace of Boko Haram.

The vice president said this when he paid a condolence visit to Gombe State to commiserate with victims of Thursday’s bomb blast that killed over 30 people.

According to him, Friday morning when we paid the President Sallah homage, he asked me to come to Gombe to commiserate with the people, the emir and governor of Gombe over the terrible incident that happened.

People should be rejoicing in celebration of Sallah but instead, they are mourning; it is unfortunate. “The incident is unfortunate; we are convinced we are going to stamp out insurgency in the country,” he said.

Chief of Army Staff (COAS) Major General Tukur Buratai has described the two female suicide bomber attacks on worshippers which killed many innocent people and injured others, “as barbaric and unacceptable.”

The chief of army staff who disclosed this when he visited the scene of the bomb blasts in Damaturu, Yobe State capital condoled with the families of the victims who lost their lives and prayed for the repose of the souls of the deceased.

According to him, the Federal Government and Nigerian military will do everything possible to expose those behind the killing of innocent people across the country.

He also urged people of the northeast region and Nigeria in general to continue their prayers and give support to security agencies.

He added that, “The effect of insurgency will be over sooner or later and Almighty Allah would expose those behind the attacks”.

Angered by the spate of explosions that rocked Gombe Central Market on Thursday and Friday’s bomb explosion in Damaturu Eid praying ground, Jama’atu Nasril Islam (JNI) Friday urged the Federal Government to be proactive in the fight against the dreaded Boko Haram sect.

JNI said, “These continued savage attacks stand condemned in their entirety. Indeed, those carrying out such acts are devils and whatever is their mission, may it be in futility and may they be put to shame.”

JNI, in a statement by its Secretary General, Dr. Khalid Abubakar Aliyu said, “Government must be seen to act proactively, so as to put a stop to these recurrent acts.”