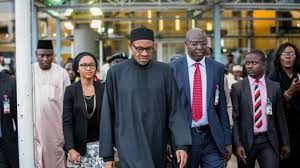 Buhari Pays 4-Day State Visit To US From Sunday 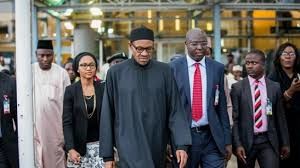 President Muhammadu Buhari will leave Abuja on Sunday for Washington DC in the United States on a four-day official visit where he is billed to hold high-level talks with President Barack Obama and other senior officials of the United States government.

Mr. Femi Adesina, Presidential spokesman, in a statement, said measures to strengthen and intensify bilateral and international cooperation against terrorism in Nigeria and West-Africa are topmost on the agenda of Buhari’s talks with Obama and other US officials.

Adesina noted that after meeting with President Obama at the White House on Monday, July 20, President Buhari will later hold further discussions with the Chairman of the United States Joint Chiefs of Staff, General Martin Dempsey and the Deputy Secretary of Defence Robert Work on military and defence cooperation.

Buhari’s meeting with Biden and others, Adesina explained, would hinge on United States support for “his (president’s) administration’s war against corruption as well as fresh measures to boost Nigeria-United States trade relations.

Adesina hinted that before leaving Washington DC, President Buhari will address the United States Chamber of Commerce and Corporate Council for Africa, as well as host an interactive session with Nigerians in the American Diaspora.

“The US trip will also afford President Buhari the opportunity of a reunion with members of the American War College Class of 1980 in which he was a distinguished participant,” Adesina stated, adding that the President will return to Abuja on Thursday, July 23.

Those who will accompany the president to the US include the Governors of Imo, Nasarawa, Edo, Borno and Oyo states as well as the Governor of the Central Bank of Nigeria.

Others are Permanent Secretaries of the Federal Ministries of Defence, Foreign Affairs, Industry, Trade and Investment.

Former Secretary General of the Commonwealth, Chief Emeka Anyaoku Tuesday met with President Muhammadu Buhari over the President’s trip
to the United States.

Anyaoku who spoke to journalists after meeting Buhari in Aso Rock, expressed a strong belief that the President was determined enough to fight corruption in the country.

He said, “I had a positive discussion with the President, we discussed international affairs, including in particular his forthcoming visit to the United States at the invitation of President Obama. We also touched on some national issues because of the strong link between foreign policy and domestic issues.

“I put at his disposal the benefits of my long experience in governance matters with Heads of Governments of 54-member countries of the Commonwealth and also other issues related to internal affairs.

“I can tell myself talking to a President who is very determined to effect a real change in the circumstances of our country and very determined too to bring to bear on his administration the generally perceived attributes of his character, which I believe many Nigerians would support”

On whether Buhari can fight corruption, he said, “Well, I believe that before he became President, he was known as somebody who has very strong passion for anti-corruption.

“I believe that he is determined to fight and he would go a long way in doing so. Corruption is a very endemic issue in our society and I’m quite impressed with his determination to do something about it.

“Well, I can tell from the strong impression I got from my discussion with him that he is very determined.”