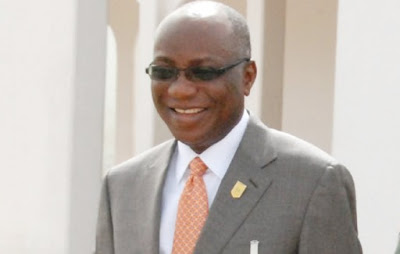 In replacement, the President appointed Lawal Musa Daura as new head of the agency which serves as Nigeria’s secret police.

Mr Danladi Kifasi, Head of Civil Service, announced the removal of Ekpenyong and appointment of his successor on Thursday via a statement by the Director of Communications in his office, Mr Haruna Imrana.

The former director general later told a journalist that he was not sacked but that he resigned at about 10 a.m. Thursday.

That claim could not be independently verified at this time. But a Presidency source said even if he resigned, he was compelled to do so.

“If he was instructed to submit a resignation letter, is that not a sack?” the source said.

According to the statement by the Head of Service, Daura, who is returning to the SSS from retirement, was born in Daura, Katsina State, on August 5, 1953.

He attended Ahmadu Bello University, Zaria from 1977 – 1980. He started his career in the State Security Service in 1982 and rose to the rank of Director.

He was at one time the Deputy Director, Presidential Communication, Command and Control Centre, at the Presidential Villa Abuja between 2003 and 2007.

He attended various professional courses both at home and abroad including the National Institute for Policy and Strategic Studies (NIPSS), Kuru.

The appointment is with immediate effect, the statement said.

Daura becomes the sixth director general of the SSS, one of the three security agencies created out of the defunct National Security Organisation in 1986.

The removal of Ekpenyong, who was appointed DG of the agency on September 8, 2010, has long been expected.

Under him, the SSS became openly partisan, especially in the run-up to the 2015 general elections.

Rather than gathering intelligence necessary to make the country safe, the agency busied itself more with harassing and arresting opposition figures, ransacking firms and offices with ties to the All Progressives Congress (APC) and appearing on television to disparage opposition politicians and their parties.

On July 25, 2014, operatives of the SSS descended on the corporate headquarters of TNS-RMS, a Lagos-based research agency, holding its staff hostage, ransacking its offices and premises and whisking away three of its personnel.

The company’s offence was that it was, at the time, conducting an opinion poll on the August 9, 2014 governorship election in Osun State. The SSS struck because it got intelligence that the poll would indicate that Rauf Aregbesola of the APC would win the election. Aregbesola later won that election.

On November 21, 2014, the agency raided the APC data centre in Lagos, arresting its staff and accusing the party of “cloning INEC Permanent Voters Card with the intention of hacking into INEC data base, corrupting it and replacing them with their own data”. The SSS is yet to prove that allegation till date.

The SSS also consistently disparaged the APC in the media, accusing the party and its leaders of being behind the deadly Boko Haram insurgency.

After the Osun election, the agency’s spokesperson, Marilyn Ogar, rushed to the media, claiming that some opposition APC politicians offered the Service’s personnel N14 million bribe.

The SSS is yet to substantiate that allegation and no one has been charged to court for bribery.

Perhaps due to its brazen partisanship during the Goodluck Jonathan era, President Buhari has related with the agency with suspicion since his assumption of duties at the Presidential villa.

Buhari ordered a reorganization of the security arrangement at the Presidential Villa, an exercise that saw the SSS sidelined, and its operatives removed from key beats and restricted to guarding only the “outer perimeter” of the State House.

Several top officers of the agency had repeatedly pleaded with Buhari to sack Ekpenyong rather than continue to humiliate the Service and all its personnel.