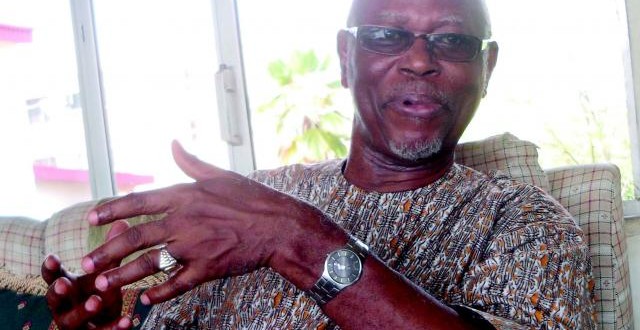 The crisis rocking the governing All Progressives Congress (APC) took a new dimension on Thursday with its National Chairman, Chief John Odigie-Oyegun, admitting publicly that he was under pressure and severe attacks by people he described as lacking in conscience and humanity over the fallout of the election of the leadership of the 8th National Assembly.

Oyegun, who spoke while granting audience to a delegation of the South-East/South-South Professionals of Nigeria led by Mr. Emeka Ugwu-Oju, who had come on a solidarity visit to the party’s headquarters in Abuja, said he is however not losing sleep over the allegation of bribe-taking against him, adding that the only annoying aspect of it was that there is a calculated attempt to rubbish his hard-earned reputation built over the years.

“I am under pressure and under very severe attacks. So, I cannot say I do not appreciate your coming here to show solidarity. The time is perfect because I need all the broad shoulders that I can lean on and it cannot be better than when your support come from your own very backyard. It means my own people appreciate me, my own people accept me, and my own people understand what is going on and are ready publicly to identify with me, my fate and my fortune.

“I was just over 30 when I started joining teams that were buying aircraft both from Holland and finally from Boeing in Seattle on the West Coast of the US. That could not corrupt me. I was on the board of the railways, the NPA, ECN which brought ECN and Niger Dam together to become the defunct NEPA and the rest, if these did not make me corrupt, how can I at 76 take money from who to do what?” Oyegun said.

He further alleged that there was “very scurrilous campaigns” against his person in the media apparently referring to a widely publicised letter written to the party leadership early in the week by his immediate predecessor in office, Chief Bisi Akande, who is a close ally of APC national leader, Asiwaju Bola Tinubu.

“So, it’s annoying, it is dirty, it is crude, it is unbecoming and it can only be people who are totally devoid of conscience and any level of humanity that can do things of that nature. It doesn’t make me lose sleep because I have a God that is so protective of me, that the people who have done these things will eventually eat their own words, I have no doubt at all about that in my mind.

“We know in politics, there is a lot of mud in it; but this goes beyond mud and it’s absolutely unethical and absolutely unbecoming. There is nothing that they have not said and the issue is when at the end of the day you ask, ‘What has the man done?’ In one of their reports, they said the present structure cannot win us elections in 2019. Good Lord! You haven’t even finished with 2015; you are already talking of 2019.

Odigie-Oyegun went down memory lane revealing that out of love for the country and democracy and against the continuation of military rule, he was exiled for four years during which his economic base was “totally obliterated” to the extent that when he came back to the country, he was carrying a “begging bowl;” but he refused to peddle influence or enrich himself through corrupt means.

“Obasanjo is a very close friend, even with that near penury, nobody saw it on my face; I did not, throughout his whole eight years, enter Aso Rock. That is the kind of person I am, so when they said ‘you are taking money from a senator’; to do what? I am not a Senator, I cannot vote, I cannot by being chairman pronounce him as Senate President or Senate Leader or as anything. So, what is he giving me money for?

Meanwhile, tension is brewing over the scheduled meeting of the National Executive Committee (NEC) of the party slated for 10amtoday as warring factions in the National Assembly leadership tussle may not shift grounds in order to achieve an amicable resolution of the current impasse, which has polarised the party.