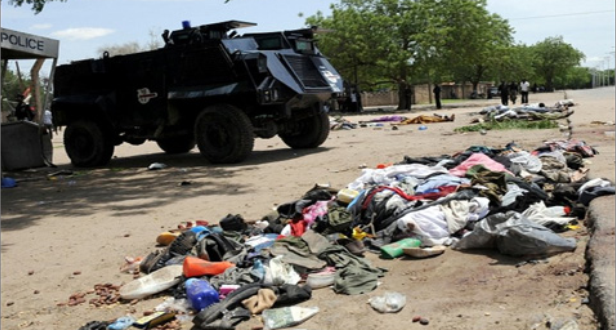 Boko Haram has killed about 145 villagers in separate attacks launched on remote communities in Monguno local government area of Borno State in the nights of Tuesdayand Wednesday, witnesses and security sources said.

The terrorists, who had been terrorizing neighbourhoods of Borno State using suicide bombers, staged two separate attacks on Tuesday and Wednesday, killing at least 145 persons and injuring nearly 40 others.

On Tuesday, a gang of militants invaded the twin towns of Musaram-I and Musaram-II in Monguno LGA at the time locals were taking a break off the day’s Ramadan activities. Mussaram is about 8km away from Monguno town.

“A total of 48 males died on the spot, while 17 others escaped with serious injuries,” said Maidugu Bida, who commands the local vigilante group in Monguno town, told journalists in Maiduguri yesterday.

“On Tuesday, the terrorists attacked the twin villages of Mussaram I and Mussaram II in the night. They went there in the night when the villagers were resting after the day’s fasting and assembled them before opening fire on them.”

Just as the people of Monguno were busy mourning their loss, the terrorists again moved on to Kukawa town, 179km away from Maiduguri, where they carried out another bestial slaughter on Wednesday night.

A top state government official who does not want to be named in this report said the gunmen arrived in Kukawa at the time the Muslim residents of the village were breaking their fast.

“They attacked different mosques where most of the residents were gathered to observe the late evening prayers before going home to properly break their fast,” said the source. “They shot at them while they were in the middle of the prayers and later set the mosques ablaze. Some of the Boko Haram gunmen also attacked houses where children and women were killed.”

An official of the vigilante group, Abbas Gava, confirmed the attack on Kukawa, saying about 10 persons who survived the attack had been taken to the hospital in Baga town.

The police and army in Borno State have not issued any statement on these developments. A text sent to the state commissioner of police seeking to confirm the incident was not replied at the time this report was being compiled.

President Muhammadu Buhari pledgedThursday that Nigeria would work with other ECOWAS member-nations and the international community in helping Burkina Faso to conduct free, credible and peaceful elections.

At an audience with Burkinabe Minister of Housing and Urban Development, Mr Rene Bagoro, Buhari gave the assurance that Nigeria would do all it can to help in the achievement of successful elections in Burkina Faso on October 15.

Bagoro was in Abuja as a special envoy of the transitional President of Burkina Faso, Mr. Michel Kafando.

“I am aware that ECOWAS is providing logistics support and some form of electoral assistance to Burkina Faso. Nigeria will provide its own support as soon as possible,” Buhari assured

The message from the Nigerien leader and President Buhari’s discussion with the foreign minister focused on ongoing efforts to strengthen the Multinational Joint Task Force established to combat Boko Haram.

The Federal Capital Territory Police Command has arrested a man on its ‘Wanted List’ who poses as President Muhammadu Buhari’s son to defraud unsuspecting Nigerians.

FCT Commissioner of Police, CP Wilson Inalegwu, made this known during a briefing where he said the suspect was arrested at about 2am on June 27 by operatives of the Special Anti-Robbery Squad, SARS, attached to the command.

Inalegwu disclosed that the man, who has been on the wanted list for fraud, was parading himself as the son of the President.

He further disclosed that three Mercedes Benz and a Peugeot 406 cars were recovered from the suspect.

“Acting on a tip-off, SARS operatives attached to the command arrested a male suspect who has been on the command’s wanted list for fraud. To perfect his act, the suspect is parading himself as the son of the President,” he said.

The FCT police chief also disclosed that about 22 suspects were arrested in connection with various offences during which six guns, ammunition, eight cars, master keys and other objects were recovered.