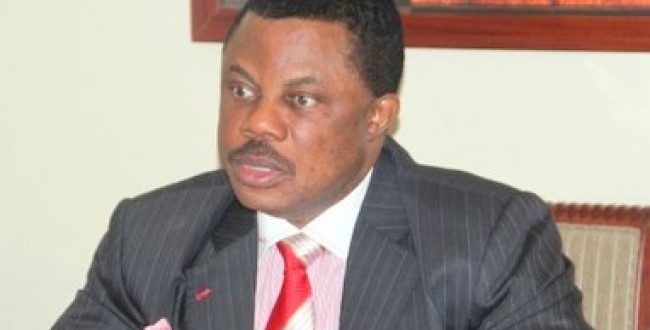 But former governor Peter Obi, in a swift reaction, expressed shock about Obiano’s claim, describing it as a blatant lie.

The governor, who spoke through his Senior Special adviser on Political Matters, Mr. Chinedu Obidigwe, said the decision was taken during a seminar organized for officers and men of Nigeria Prison Service (NPS) in which Ekwulobia and Kuje prisons in Anambra and Abuja capital territory respectively were chosen as prisons for the Boko Haram inmates.

Obidigwe said the transfer of Boko Haram suspects would have been effected immediately but for the 2015 general elections on grounds that it would affect the second term ambition of Jonathan in the South East geo-political zone.

He claimed that a decision made under the nose of past administrations in the state and the country in general should not be blamed on the current regime in Anambra.

“Inasmuch as the state government would not want to join issues with such section of the public, it is important to note that the policy of transferring Boko Haram inmates to Anambra State had been made since 2012 under the regimes of ex-president Goodluck Jonathan and Mr. Peter Obi, but for the 2015 general elections which the then president was contesting for a second term.

“Since the transfer of the 47 inmates, panic had gripped the people of Ekwulobia as residents in the area were apprehensive of imminent attack by members of the Boko Haram Islamic sect,’’ he said.

Reacting to the claim that former president Goodluck Jonathan    and    former governor Peter Obi were behind the relocation of Boko Haram terrorists to Anambra State, the media aide to Peter Obi, Mr. Valentine Obienyem, said he was shocked that Governor Obiano would personally sign such a release laying claims to what appeared nauseating and childish.

Obienyem said that such a claim would only end up proving to the people that there were more to the relocation than they already knew.

Describing the claim as a blatant lie, Obienyem wondered how an action or a plan concluded by a man who left office almost 16 months ago was being implemented now.

He said: “The governor is clearly looking for an alibi for an action that was against the people. He should look elsewhere and not in the direction of Mr. Peter Obi, who, since he left office, had opted to stay away from Awka and not to distract the present government in any way.”

Obienyem said Anambra people expected commendation from Obiano for Obi for the N75 billion in cash and investment he left for him and for restoring the pride of the state when other governors were bequeathing debt to their successors, rather than trying vainly to drag his name in the mud through statements such as this present one linking him to the Boko Haram issue.

He said the present campaign was not the first, recalling that the same people mass-produced documentaries against Obi and shared them free to people.