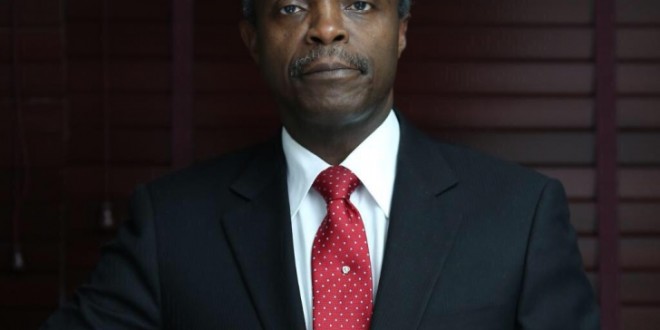 June 29, 2015 Comments Off on Poverty Level In Nigeria Is Intolerable — VP Osinbajo 28 Views

Vice President Yemi Osinbajo says no decent nation can tolerate the level of poverty currently ravaging the country and unless there is a functional social system where the highly vulnerable are assisted to survive, the vast majority of the population would die before long.

Professor Osibanjo, who stated this in Calabar Thursday in a keynote address on the 10th anniversary of the Late High Court Judge, Peter Bassey Foundation Lecture, said those against the Federal Government’s policy of Conditional Cash Transfer, where those without jobs would be given N5,000 each to assist them, are only being callous and ignorant of the pitiable plight of large numbers of the population in the country.

“Social protection system is absolutely essential to assist the highly vulnerable in our society; but  I hear some critics  say that people should work to earn money. But the only way out for now  is to ensure that people  who earn  nothing can eat to avoid preventable deaths.”

He said while the government is working towards creating jobs and enabling the private sector to revamp and build industries to provide employment, government has a responsibility to ensure that the vast majority of Nigerians who are extremely poor are catered for through the Conditional Cash Transfer system  to enable them  eat and take care of their health needs.

“If we have to wait until the industries are functional and the government is able to provide jobs for everyone, most people would be dead by the time we get to that stage.”

“The justification of stealing, cheating and corruption is because we have not adopted the values for doing the right thing. The biblical injunction, ‘thou shall not steal is not only to stop  stealing, but attuned  to a just and right way of doing things  because  if you are supposed to report for work at 8:00 am but you show up at 11:00 am, you are stealing your employers’ three hours and should therefore be paid for the time you reported and not a whole day’s work.”

He said development can only be witnessed in  the country only if the right people are appointed  into the right position on merit, not  via Federal Character  formula which is skewed to favour where someone comes from and not what he can offer. “We have the chaos we have in the country today because people want to get away with anything. This is because Federal Character is the first  rule where people are appointed into positions based on the zone or state he comes from and not on merit. Until there is a reverse, development will continue to elude us.”