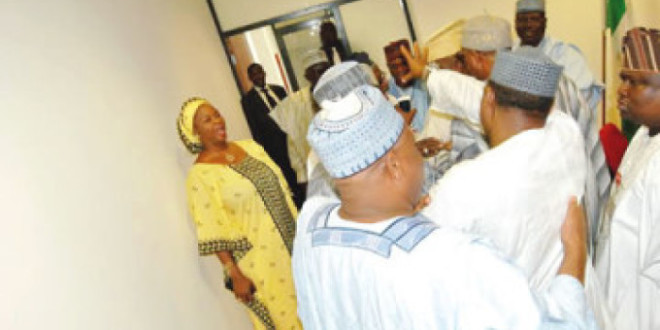 The Senate on Wednesday rejected a move by some APC senators to read the letter by the APC recommending some senators to occupy other principal officers of the senate.

Sen. Gbenga Ashafa (APC-Lagos East), who relied on Order 15 of the Senate Standing Order, urged that the President of the Senate should read on the floor of the Red Chamber the letter from the party.

“Yesterday, most of the media houses carried a letter that was written by the Chairman of our great party, the APC.
“We were expecting that that letter which has been received in your office will be read in order to see to the resolution of the party leadership tussle,” he said.
He backed the decision of the party leadership to recommend persons to occupy the other positions exclusively preserved for the party.

“I believe that that letter should have been read to the hearing of all senators here present. Perhaps that will be the solution to the leadership tussle in the Senate,” he said.

However, Sen. Ibn Na’Allah (APC-Kebbi South) immediately countered the point of order and explained that the nomination should be made `from’ the party not made `by’ the party.

“By the ordinary principles of interpretation of documents that have been agreed by parties, the ordinary letters and words used must be given their effective meaning.

“Order 28 used ‘from’, not ‘by’. What this seeks to do is to deter the minority party from nominating the Majority Leader,” he said.
The President of the Senate, Dr Bukola Saraki, who presided over the plenary, ruled Sen. Ashafa out of order and declined to read the letter.

He said: “I have listened to Senators Ashafa and Na’Allah. Going by the rules and what has been said earlier, I think I will just note what Senator Ashafa has said.
“We will leave the matter at that and in that case, rule that out of order.”

Another attempt was made by Sen. Kabir Marafa (APC-Zamfara Central) to question the June 9 election of Saraki and Ekweremadu, but that too was ruled out of order by the Senate President.

Marafa, relying on Order 110 and 3(e) (i) of the Senate Standing Order, sought to know which of the Order Books (2011 or 2015) was being used to coordinate the activities of the 8th Senate.

He described the 2011 Senate Standing Order as ‘genuine and authentic’ thereby countering the authenticity of the Senate Standing Order 2015.
“I am still referring to the events of the 9th of June, 2015, in this chamber. I have two Order Books and I am running into confusion, and I think there’s a need for the President to rule.

“Which of the Order Books are we going to use to coordinate the activities of this Senate?’’ he asked.
Marafa insisted that there was a conflict in the two books as to the procedure that should be taken for election of presiding officers of the Senate.

“If you look at Section 64 of the 1999 Constitution it says that the Senate and House of Representatives shall each stand dissolved at the expiration of a period of four years commencing from the date of the first sitting of the house.

“So, the implication is that the rule he was referring to ended with the Senate on the 6th of June,” he said.
The President of the Senate thereafter ruled Sen. Marafa out of order.