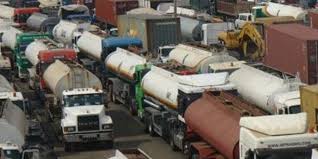 As a measure to checkmate the excesses of traffic gridlock at major points in the Apapa area of Lagos state, Governor Akinwunmi Ambode said a task force would be immediately set up to ensure 24 hours’ surveillance of traffic flow in the area.

Ambode spoke when he visited major traffic points in the area to get a first-hand experience of the gridlock which has defied solutions in recent times.

Speaking after the inspection, he stressed that the Lagos Road Traffic Law would be enforced to the letter.

He said, “Right now on our part, the immediate palliative is that we will set up a task force that will involve most of our security agencies, including the police and will do a 24/7 monitoring of the traffic.

The governor appealed to the Federal Government to mobilise the contractor awarded the construction of the Apapa road network to immediately return to site.

Ambode, who was accompanied on the visit by top officials of the state government and security agencies, said he was particularly disturbed about the nightmares commuters and motorists were condemned to face on a daily basis.

According to him, the traffic problem on the roads in Apapa was largely due to the indiscriminate parking of articulated vehicles attempting to access the port and tank farms located in the area.

Mr Habib Aruna, his Chief Press Secretary, in a statement quoted the governor as saying, “What we have done in the last three hours is trying to find out what are the issues that pertain to Apapa. We have all seen that the gridlock in Apapa is multifaceted. We have examined things that relate to activities of trailer and tanker drivers.”

He noted that the network of roads in Apapa belonged to the Federal Government, lamenting that the Tin Can Port Bridge which has been under construction for about six years, was abandoned.

And the abandonment has given tanker drivers the opportunity to park indiscriminately on the road.

Ambode said, “It is totally unacceptable that we would be having tankers and trailers on our bridges. It is also not acceptable that they would decide to block all lanes that lead to Apapa. We have also seen that we must do something immediately to alleviate the challenges that the residents and businessmen are ‎facing.

“What we want to do now is first to appeal to the Federal Government and most especially Mr. President that the contractor working on this particular bridge should come back to site and once we are able to open the trailer park, we would be able to allow other trailers and tankers to use the park.”

He also expressed concern about the activities at the 57 tank farms in the Apapa area, saying they constituted great security challenge to the state government, adding that owners of the farms would be summoned to a meeting soon.

“The greater part of this challenge is posed by the tank farm owners. As we speak, we have 57 tank farms around Apapa alone; that’s a major security challenge for the state government.

“We have to start to look at the security issues relating to these tank farms. All trailers across the country come to these tank farms and the tank farm owners, we are going to direct them in the next few days, they would be summoned to a meeting and they have to tell us what is their remedy to this menace that we are having in Apapa,” the governor said.

Ambode also assured residents that road networks in a deplorable state in Apapa would also be repaired.