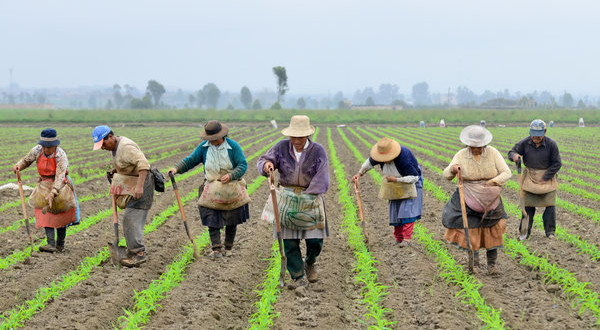 June 29, 2015 Comments Off on A Road Map for Eradicating World Hunger 17 Views

A lot has changed in Ethiopia since hundreds of thousands of people died in the famine of the mid-1980s. Rates of undernourishment have plummeted in the past 25 years, child mortality is down by two-thirds and 90 percent of children go to primary school.

Now, the country whose name was once a byword for hunger is part of a global effort to end it entirely. Around the world, nations as varied as Brazil, Cambodia, Iran and the Philippines have reported progress toward the goals of the Zero Hunger Challenge, a campaign that the United Nations began in 2012.

The campaign’s ambitious target of eradicating hunger, experts say, helps lend structure and clarity to efforts to ensure that even the very poorest have enough to eat and to make food systems more resilient in the face of climate change, droughts, floods and other pressures.

Zero Hunger “is a challenge and it’s a hope,” said Danielle Nierenberg, president of Food Tank, a research and advocacy organization in New Orleans. “It gives us a concrete framework so we can get to a situation where everyone is well fed. I think that’s a realizable goal over the next 50 years.”

The goal is more complex than it may sound, however. The biggest challenge, experts say, is not simply for the world as a whole to produce enough food, though the pressures of a warming climate and a growing global population are likely to make that more difficult.

Ending hunger has more to do with making sure that the poorest have the means to buy or grow enough to keep their families well nourished and that infrastructure is strong enough and markets sufficiently robust to get food to where it needs to be, the experts say.

And it is about more than just filling bellies. Deficiencies in micronutrients like vitamins and iron, especially in the first years of life, stunt development and leave children with permanent physical and cognitive deficits. The World Health Organization estimates, for example, that as many 500,000 children go blind every year because of vitamin A deficiency, and half of them eventually die.

Even among those who are well fed, infections or other ailments caused by poor sanitation and contaminated drinking water can prevent their bodies from absorbing necessary nutrients, a problem that is particularly acute in India.

“We used to many years ago think of hunger as just growing enough food to feed the world, and I think we’ve now understood it’s not a matter of sufficient aggregate supply,” said Homi Kharas, a senior fellow at the Brookings Institution. “It’s a matter of making sure the people who really need the food are able to produce and buy it.”

In a world where some of the estimated 2.1 billion overweight and obese people are also malnourished, changing unhealthy and unsustainable food production systems is critical, Ms. Nierenberg said.

In Ethiopia, government-backed efforts to strengthen small-scale farmers and lift their productivity by improving fertilizer and herbicide use and expanding irrigation have made a big difference, said Amare Haileslassie, senior researcher at the International Water Management Institute in Addis Ababa.

Population growth, though, is driving up demand for food, and any shift in rainfall patterns could cause trouble, Mr. Haileslassie said. Nonetheless, Ethiopia today is much less vulnerable to famine than it once was, he said, in part because of better infrastructure and an increased focus on building stocks for times of need. “It’s too early to say that Ethiopia is food secure, but progress is made,” he said.

Despite such improvements, Africa as a whole is lagging, said Jomo Kwame Sundaram, assistant director general for economic and social affairs at the Food and Agriculture Organization. The organization, an arm of the United Nations, reported in May that 795 million people worldwide were undernourished, 167 million fewer than a decade ago, and 216 million fewer than in the early 1990s.

The world is falling short of the goal that presidents and prime ministers agreed to in 2000 of halving the hunger rate by this year. Worldwide, 10.9 percent of people are undernourished, down from 18.6 percent in 1990-92, the food agency reported. In developing countries, the proportion fell to 12.9 percent from 23.3 percent. “We have come close” but not reached that target, Mr. Sundaram said. And the bar is low, because only those who are hungry year round are counted, and the caloric threshold is conservative, given the need of many poor people to do manual labor, he said.

Progress has been concentrated in Latin America, the Caribbean and East, Southeast and Central Asia, Mr. Sundaram said. While the proportion of hungry people in Africa has fallen, the absolute number has increased, he said.

Central Africa is one of two areas to have gone backward. The other is West Asia, which includes Iraq, Syria and Yemen. The reversal in both regions, Mr. Sundaram said, highlights the role that political upheaval and accompanying warfare can play in undermining food security.

The greatest successes, on the other hand, have come in countries “where you have strong commitment by government leaders at the highest level — president or prime minister,” he said. That was the case in Brazil, whosesuccessful efforts against hunger are widely seen as a model.

When Luiz Inácio Lula da Silva was the country’s president, from 2003 to 2011, improving nutrition “was obviously something that was very personal to him,” given his focus on fighting poverty, said Mr. Kharas, the Brookings Institution senior fellow.

A school-based program gives meals to 43 million Brazilian children every day, helping to reduce child malnutrition by 73 percent, the World Food Program says. Brazil also gives cash payments to the poorest families if they meet conditions like sending children to school and getting them vaccinated.

In Brazil and China, school meal programs buy from farm cooperatives, Mr. Sundaram said. That has bolstered small-scale producers, while also requiring them to grow more nutritious crops, a demand that has the added benefit of improving the variety on offer in local markets, he said.

In Pakistan, on the other hand, 58 percent of the population still does not get enough to eat, said Abid Qaiyum Suleri, executive director of Sustainable Development Policy Institute, a research organization in Islamabad. While leaders have begun a Zero Hunger effort, and promised more school meals and supplements for young children and pregnant women, “that plan could never take off, because the Ministry of Finance never allocated any funds,” Mr. Suleri said.

Too many Pakistani officials, he said, believe that their country cannot suffer from food insecurity because it exports food. In reality, many Pakistanis are too poor to buy enough to eat, and water contamination inhibits people’s ability to absorb critical nutrients, he said.

The push to eradicate hunger is likely to be enshrined in the Sustainable Development Goals, a set of 2030 targets being drafted to succeed the Millennium Development Goals on poverty reduction for 2015, which world leaders agreed to at the turn of the century.

Ending hunger “is an achievable goal,” he said, “but it’s only achievable if we do things a little bit differently from what we’ve been doing.”