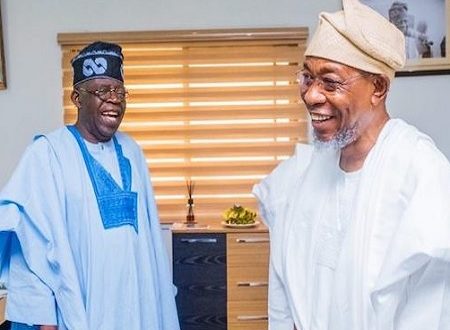 minister of interior, Rauf Aregbesola has congratulated former governor of Lagos State, Bola Ahmed Tinubu on his victory as the presidential candidate of All Progressives Congress(APC).

Tinubu was declared the winner of the election after polling a total of 1, 271 votes to secure the presidential ticket of his party.

Aregbesola in a letter addressed to Tinubu, praised the former Lagos governor for his efforts at ensuring that democratic principles are established.

The minister also wished the APC candidate victory in the 2023 presidential election.

“I write to felicitate with you on your hard fought victory at the just concluded Presidential Primary election of our great party, the All Progressives Congress (APC),” the letter reads.

“You have demonstrated once again that you are a dogged fighter and in your quest for the establishment of a democratic society, you are willing to go the whole hog.

“It is my prayer that you will ride on the crest of the momentum of this triumph to lead our party to victory in next year’s General Elections.

“On behalf of my family and our associates, I heartily congratulate you on this well deserved victory. Congratulations sir.”