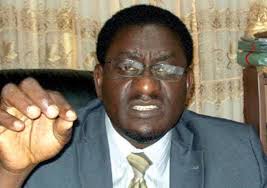 The Committee for the Defence of Human Rights, (CDHR), Delta State branch, has applauded the recent suspension of its Chairman and National Vice President of the foremost rights group, Prince Kehinde Taiga, by the National Executive Committee (NEC), of the organization

A release by the Assistant Secretary of the Delta State branch of CDHR, Comrade Israel Joe, aligned with the national body of the CDHR, saying the suspension was a right step in the right direction, in view of glaring ineptitude being perpetrated by the ousted Vice President.

A three-man committee constituted by the national body of CDHR, has mandated Taiga to step aside for one year to allow proper investigation into an array of offences, bothering on abuse of office, while he was Chairman of the Delta State Chapter of the group.

“We the comrades of CDHR, Delta state branch, fundamentally back our amiable national president, Dr Osagie Obayuwana, on the decision of NEC to suspend, Comr. Prince Kehinde Taiga for a period of one year from our organisation. The president who acted on the report of the three-man committee set up by Delta State stakeholders has taken a very good step in the right direction. We cannot claim to speak for the oppressed while we harbour corrupt officials in our midst.”

The former Vice President, in the person of Comr. Prince Kehinde Taiga, was accused and indicted by the committee report for high-handedness, embezzlement of public funds, providing covering (membership) for internet fraudsters, constitutional breaches and acts of indiscipline.

The Delta state branch, in their letter of solidarity attested to the truism of the allegations and said they have evidences, for which the committee acted.

The Delta CDHR condemned a splinter group currently mounting support for Taiga, saying “they are few inconsequential collaborators, who formed alliance with the suspended Vice President in dragging the name of the group in the mud.

“Those comrades and few members of NEC supporting Comr. Taiga, and, in the guise to make him escape justice, thereby accusing the National President of not giving financial account to the organisation, could best be described as the putting up the feeble kicks of a drowning man.

“We hereby uphold the suspension in view of the fact that CDHR would continue to be the foremost human rights organisation in the country and beyond. We shall continue to wipe out all bad eggs in the system, as we entrench the creed and principles of justice, the world over.”