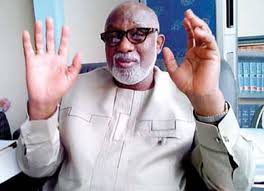 Leadership is not a position or a title, it is action and example -Cory Booker

That the incumbent governor of Ondo, Rotimi Akeredolu (SAN) was recently announced as the flag-bearer of the All Progressives Congress (APC) in the forthcoming gubernatorial election, with a landslide victory over his competitors is no mere coincidence. It is no accident either. Indeed, it rings true for a man who is not only a legal luminary but passionate about the development of his enlightened and education-loving people. Interestingly, he has consistently stood out at the forefront of the crop of patriots wanting the best for his country, Nigeria.

Incidentally, he hails from the ancient town of Owo, where the progressive political philosophy took its root back in the heydays of the late sage, Chief Obafemi Awolowo’s Action Group(AG). What more, Owo his hometown happens to be where the much-applauded Free Education policy took off as conceived by Chief Festus Awosika (of blessed memory).

In fact, Akeredolu who was selected as the Attorney-General of Ondo State during the military era of Navy Captain Anthony Onyearugbulem based purely on merit did not nurse any political ambition. But as fate would have it when the progressives thought it wise to come together to form the Action Congress of Nigeria (ACN) in 2012, he was chosen as their governorship candidate. That choice was predicated on the sterling qualities of integrity, focus and as a principled man who is always on the side of the common man.

Even after losing the gubernatorial poll to Olusegun Mimiko, then of the Labour Party he has remained steadfast in defending the noble cause of the progressives in Nigeria’s unpredictable political landscape. As one not ready to capitulate in the face of odds, he bounced back stronger and clinched the governorship ticket. That was on the platform of the then newly formed political party, the APC.

As a humanist, concerned about the welfare of the good people of Ondo state, Governor Akeredolu ensured that his administration cleared the backlog of the seven months salaries owed the workers by his predecessor. Not done, he has taken giant strides in the critical areas of education, healthcare delivery, infrastructural development, security, youth empowerment and industrialization. All these are anchored on stringent accountability processes.

On infrastructural development, his administration has constructed   and rehabilitated 239 kilometres of road within three years in office. Amongst these are that of Iwalewa Road, Oba Osupa/NEPA roundabout/Olukayode/Hospital/Alafiatayo as dual carriage way,

In the critical area of healthcare delivery, the governor has signed into law, a contributory health insurance scheme which enables all classes of people in the state to access affordable health care services. He has also facilitated the presentation of 40 imaging medical items to the state medical village by the People’s Republic of China.

The distribution of medical equipment and consumables worth $6m among all the hospitals in Ondo State is worthy of mention. This was achieved by the administration’s ingenuity leading to partnership with Medshare International.

Besides all these, the massive renovation of the various Primary Health Care centres in all the Wards of Ondo State and the recruitment of over 500 health personnel including 200 medical doctors have stood him in good stead.

Under Akeredolu, over N210, 000, 000 have been disbursed to farmers’ co-operative societies under the FADAMA Scheme.

So, also is the distribution of over 1,000 metrics tons of fertilizers to farmers for enhanced farming. His administration has also mobilized 35,000 farmers for the Anchor Borrowers Scheme.

The procurement of top-quality tractors to aid farmers’ productivity, establishment of Igba Otun broiler Scheme where farmers were given 2,000-day-old chicks with feeds, drugs and vaccines, as well as the empowerment and training of over 1000 bee-keepers are great steps taken in the area of food security. Other equally significant achievements include the distribution of over 100,000 Brazilian cashew seedlings and top-quality oil palm seedlings to farmers across the state. Add these to the empowerment and training of about 6,000 youths to become Agripreneurs as well as the soft loans given to women, youths and the vulnerable through the State Micro-Credit Agency and there is cause for joy at the grassroots development.

On water supply, mention must be made of the digging and resuscitation of over 2,700 boreholes in the  rural and urban areas through the “Kamomi Aketi Water Scheme”.  And when it comes to education, the construction of over 700 blocks of classroom through SUBEB in the 18 LGAs of Ondo State is worthy of commendation.

When it comes to Internally Generated Revenue (IGR), great leaps have been made from a horrible inherited less than N800 million monthly chart to not less than N2 billion as at January 2020. This gain is boosted by the recruitment of over 500 graduates into the State Internal Revenue Service.

The massive industrialization of Ondo State which was  truncated during the administration of the late Chief Adekunle Ajasin in 1983, has been revived with the establishment of Ondo/Linyi Industrial Hub in Ore. The hub has the following industries with close to 2,000 workers. These include the cassava to ethanol factory which produces 300 metric tonnes of ethanol per day; the Medium density fibre (MDF) plywood factory; and the high density fibre board plywood factory. Others are the paper production factory, the Win-win Textile Industry and the Dongfeng Trucks Assembly plant.

On the issue of security, it stands as a milestone achievement to the governor that he stood firm and resolute in defending the safety of not only the good people of Ondo state but the entire South-West geo-political zone. That is with regards to the conceptualization, legal streamlining, funding and eventual take-off of the Amotekun Security outfit.

From the outset he kept insisting that the primary purpose of government is to guarantee the protection of lives of the citizens and provide for their welfare. That is tandem with Section 14(2) (b) of the 1999 Constitution (as amended). And more importantly, he matched his words with the much-needed timely actions as the Chairman of the South-West Governors Forum. Others had no option but to key into the security programme. The Yorubas applauded his courage and candour. So far, so good.

Another interesting scenario is that over time, his self-serving traducers who are left with little to complain about his performance, doff their hats for his political dexterity, sheathe their swords and jump ship to be piloted in the right direction of people-oriented policies, programs and visible projects. That is the stuff leaders are made of. Not puerile propaganda. Not hypnotizing hysteria of the maligned masses. And certainly, not throwing oneself about with ‘’vaulting ambition that soon falls on the other’’, as William Shakespeare would say.

So now, the chickens have come home to roost. Governor Akeredolu is set to become a game-changer and indeed a jinx-breaker of a different kind. The reason is this, no other politician from Ondo-North Senatorial District who was a governor won a second term bid. Former Governor Chief Michael Ajasin spent four years and three months. Likewise, Adebayo Adefarati, who spent four years.

Based on his sterling performance in office, his accommodating spirit of all indigenes irrespective of religion, social status or political inclination, he is good to go and we wish him all the best.

Ajanaku was Director of Media and Publicity to  Akeredolu Campaign in 2012. He also served as Special Adviser on Information and Strategy to Gov. Akinwunmi Ambode of Lagos State.

Share
Previous Buruji Kashamu Hides as FG Moves to Extradite Him to America; Fears He Might Have Contracted COVID-19
Next Diezani: CACOL Commends Judiciary for Summoning Ex-Minister- Pleads for Judicious Prosecution 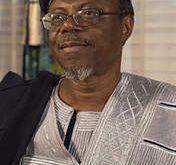