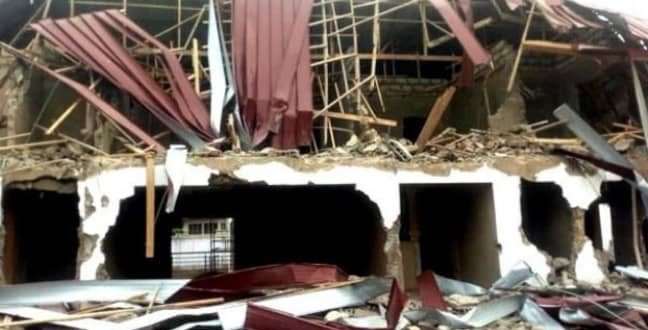 June 23, 2020 Comments Off on Ghana To Punish Attackers Of Nigerian High Commission 26 Views

Ghana has promised to fish out and punish those involved in the attack on Nigerian High Commission in Accra.

Some armed men had invaded the Commission and destroyed some buildings said to be residence under construction for members of staff.

The country’s ministry of foreign affairs and regional intervention said the incident was being investigated. It added security has been beefed up at the commission, assuring the Nigerian authorities that “the situation is under control.”

However, a monarch was quoted as telling Joy News in the country that high commission was aiding a businessman to forcibly take over the plot of land belonging to his people.

Nii Okwei Kinka Dowuona VI, the chief of Osu said the land was different from the one being occupied by the high commission.

The ministry of foreign affairs in a statement said “It has come to the attention of the Ministry of Foreign Affairs and Regional Integration that unidentified individuals had allegedly breached the premises of the Nigeria High Commission in Accra and demolished its property under construction around 10:30pm on Friday, 19th June, 2020.

“The Ministry views, with concern, this development which is a breach of the Vienna Convention on Diplomatic Relations (VCDR. 1961).

“Accordingly, investigations are ongoing to unravel the facts of the matter and bring the perpetrators to book. Meanwhile, the Government of Ghana has beefed up security at the said facility and the situation is under control.

“Whilst expressing regrets over the incident, the Ministry wishes to reassure the Diplomatic community in Ghana and the Nigeria High Commission in particular, that Ghana remains a law-abiding country that upholds the principle of the rule of law, where due process is followed at all times. The Government will, therefore, not relent on its primary obligation to guarantee the safety of Members of the Diplomatic Corps in Ghana.”

Nii Okwei Kinka Dowuona VI said the High Commission trespassed on the plot of land which belongs to the Osu stool.

He alleged that the ongoing structure is “planned entertainment complex to be used as an events centre for commercial purposes.”

“The Stool has a high level of respect for foreign missions and has therefore on several occasions verbally informed the unidentified trespasser of the ownership status of the land through the security personnel resident on the parcel of land.”

The monarch said the alleged trespasser was invited for discussion on the ownership of the land but the he “has openly and with impunity disrespected the paramount Chief of the Osu Traditional Area, Stool Lands Authority and the Traditional Council of Elders by its attendant behaviour.”