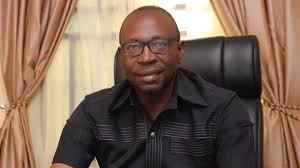 This was made known by the chairman of the Edo primary election and Imo State Governor, Hope Uzodinma on Monday in Benin City, the state capital.

Uzodinma declared Ize-Iyamu winner of the direct primary after polling 27, 838 votes to defeat his rivals, Pius Odubu who garnered 3, 776 votes and Osaro Obazee who got 2,724 votes.

Following this development, Ize-Iyamu becomes the APC  flag bearer for the gubernatorial election in September.