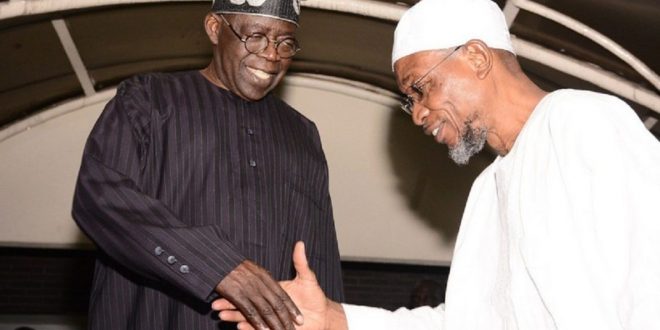 Aregbesola, Tinubu: End of the road?

The man regarded as the Lord of the manor in Lagos State, Asiwaju Bola Ahmed Tinubu, and his Siamese twin brother, former governor of Osun State Ogbeni Rauf Aregbesola seem to be falling apart.

Recent moves in Lagos which led to the outright ban of all groups within the Lagos chapter of the All Progressives Congress (APC), according to sources, may not be unconnected with the fact that Asiwaju Tinubu is getting uneasy with the reported undercover moves by Aregebesola. It was learnt that Aregbesola who is also the Minister of Interior has been making moves that Asiwaju thinks were meant to undermine him not only in Lagos but even at the national level. It is not a secret that Asiwaju Tinubu is interested in contesting for the presidency in 2023.

Aregbesola had recently revived the Mandate Group, which is Tinubu’s major political platform. In reviving the group, he named Abdullahi Enilolobo, who is his own man as the new chairman.

On the other hand, Tinubu’s choice and Man Friday, James Odunmbaku, was named “apex leader”. This is a nomenclature that is sine qua non. A sort of promotion to irrelevance because he would no longer be in the centre of action and may not be able to influence anything in favour of Tinubu.

Although there are speculations that Aregbesola with the new move might be preparing himself for presidency in 2023, however, this is difficult to confirm or say because politicians in Nigeria always deny even the most obvious moves until the last minute.

In the same vein, Tinubu’s decision to dissolve all groups within the party came as a surprise even to his most trusted ally, Aregbesola. This is because it was not discussed earlier nor were there indications that it was going to be done.

There seems to be realignment of forces in readiness for the 2023 race. For instance, the cantankerous governor of Kaduna State, Nasir el-Rufai had at the recent 63rd birthday anniversary of Aregbesola kicked Tinubu by saying that he is Aregbesola’s man and not Tinubu’s. He was quoted as saying at Aregbesola’s event that “I want to congratulate my brother, Ogbeni (Aregbesola), on his birthday. You know I’m your man any day. I’m not Asiwaju’s man and you are Asiwaju’s man, but I am your man any day. Asiwaju and I have differences but you and I have no differences.” This had not always been so, El-Rufai had in the past invited Tinubu to Kaduna to commission some projects in his state. But his recent tantrums are seen as perhaps a way of realigning his moves too.

Aregbesola and Tinubu have been age-long buddies. In fact, he served as works commissioner for the two terms Tinubu was governor of Lagos. He was one of the most powerful and influential commissioners in Tinubu’s cabinet. This recent move is been studied by political pundits to see whether the hitherto close allies are falling apart. But another source affirmed that this is not enough to infer any division between the two powerful political gladiators of the southwest.