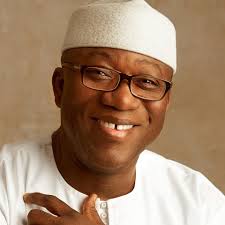 March 14, 2020 Comments Off on Alaafin, Ooni, others Caution Fayemi on Tradition Breaches 47 Views

The Ekiti State governor, Dr Kayode Fayemi has found himself on the horn of a dilemma as eight prominent Yoruba traditional rulers, led by Alaafin Oyo, Oba Lamidi olayiwola Adeyemi and the Ooni of Ife, Oba Adeyeye Enitan Ogunwusi, rose in defence of the 16 Ekiti kings currently under probe by his government.

The traditional ruler, also comprising the Alake of Egba Land, the Awujale of Ijebu Land, Owa Obokun of Ilesha, Orangun of Ila Olu of Ilaro and the paramount ruler of Yewa Land in Ogun State, warned the governor to tread softly over traditional matters, saying the supremacy of the 16 leading traditional rulers in Ekiti was agelong and in line with tradition.

The 16 leading traditional rulers, christened “Pelupelu” was structured at the end of the legendary Kiriji War in Ekiti in 1886 and had remained so before the sudden upturn by the incumbent government of the state led by Dr Fayemi.

Advising the governor on the sensitivity of the matter in a letter signed by the ‘Iku Baba Yeye,” the Alaafin of Oyo, the traditional rulers cautioned on what could be the outcome of the prevailing action and advised Fayemi to allow peace reign by backing out on his intended mission.

“The letter reads in part: This is in respect of recent happenings in Ekiti State with regards to Traditional Rulership in the state under your Excellency’s leadership.

“Specifically, this is in respect of the composition of the Council of Obas and Chiefs in the state. Let me start by saying that the sacrosanct of Pelupelu that grades the sixteen crowned Obas in Ekiti Land is not in doubt.

:Suffice to say Your Excellency that in any human society  and more so in Yoruba Land, order of hierarchy and seniority are of vital consideration in position placement,” the letter reads.

Meanwhile, the government in denying the fact that he offered the dissenting Obas query had by itself admitted that it wrote to eleven of the sixteen Obas to explain their considered acts of insubordination

Copy of the letter from Alaafin of Oyo and his team: 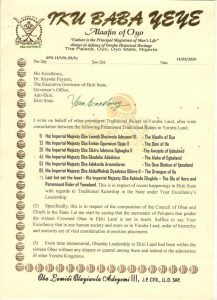 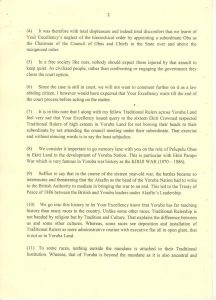 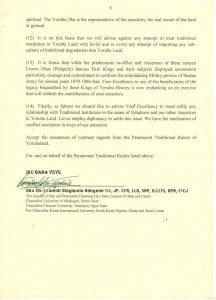